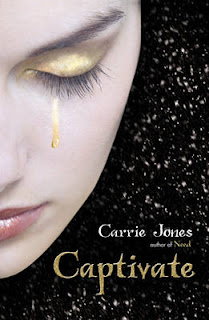 First Lines: There are these bizarre people who actually like physical education class.

Review: Captivate is the sequel to Need which I enjoyed very much. I've already bought Entice which is good, as this one ends on a cliff-hanger ie part way through a larger story.

This review will contain some spoilers for Need so stop here if you don't want to know too much about Need.

In Need, Zara White has moved to Maine after the death of her step-father. She has discovered that's she's part pixie and that two of her new best-friends are shifters. She has found, family, friendship and love and an inner strength to protect them all by imprisoning the local pixies who have been killing young men.

However in Captivate, trouble is again brewing as the removal of the pixie clan has left a power vacuum and other pixie kings are looking to takeover the territory. There are two contenders but one of them a young pixie, Astley who is very handsome as a human, appears to be a 'good' pixie and though he wants Zara as his queen, he is not forcing her.

Zara was not considering turning into a pixie, ever, however as the fighting escalates, an unfortunate event means she just might have to. Can she trust Astley and will she be able to trust herself?

Captivate is a breathless read. Full of romance and sadness and an increase in violence from Need - the tension doesn't let up and though the ending is quite quiet after what has gone before it - it is the lull before the storm as a "final" battle is prophesied. Zara is an enormously likeable character, smart and witty and fiercely loyal and who questions herself about what she's had to do and is willing to change her mind when presented with new evidence. More is revealed about the other characters - Issie, Devyn and Nick and they play a larger role than before and a new character, Cassidy, is introduced.

Each chapter is prefaced by a "Pixie Tip" which is often humorous, eg: "A pixie's true skin colour is blue. Cookie Monster. Grover, and other lovable Muppets are blue. Do not confuse the two. Muppets don't kill you. Usually."