Review: My Soul to Take by Rachel Vincent 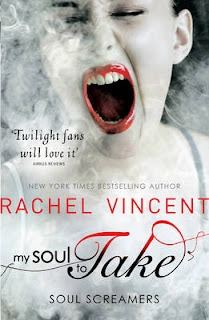 First Line: "Come on!" Emma whispered from my right, her words floating from her mouth in a thin white cloud.

Review: My Soul to Take was published in the US in August 2009 and though it's only just over a year since then, it's felt a long, long wait for a UK publisher to pick it up. So, a big thank you to MIRA who have this and loads of other goodies in their MIRA Ink collection for 2011.

My Soul to Take is the first in the "Soul Screamers" series and in it we meet sixteen-year-old Kaylee Cavanaugh. Kaylee lives with her aunt, uncle and her cousin in Dallas. Her single parent father, apparently unable to cope with raising her, lives in Ireland. A while ago, Kaylee spent time in the psychiatric wing at the local hospital due to a panic attack with uncontrollable screaming.

The book opens with Kaylee and best-friend Emma sneaking into a night-club. Kaylee is very surprised when one of the gorgeous seniors, Nash starts talking and dancing with her - how has he noticed her? Her fun is short-lived when she notices one of her fellow dancers is covered in a dark "shade" and her panic attack begins. Emma and Nash hustle Kaylee away and Nash is able to help Kaylee control her screams. There is more to him that meets the eye...

The next day, the news reports that a girl died at the club - with no visible cause of death. Kaylee recognises the dead girl as the one causing her to want to scream. This is just the first in a series of beautiful, young girls dropping dead and it becomes time for Kaylee to find out the truth about herself, about the family who have been lying to her and also about Nash. Armed with the truth she has a chance to stop who or what is taking people's souls before their time.

My Soul to Take is part mystery, part romance whilst completely setting up a new mythology and building a new world for Kaylee to inhabit. It appears to lay the foundation for the rest of the series - there is a lot for the characters to take in and new levels of detail are revealed as the book goes on. I enjoyed it very much and kept thinking about it whilst I wasn't reading it. The last forty pages brought me to tears frequently as it was so sad and so believable. Kaylee is a strong, likeable heroine, who does the right thing despite the consequences. Nash is her mentor, her Obi-wan, and has experienced life a bit more than Kaylee and they make a fine team. They are helped at times by the mischievous Tod, a reaper of souls, who is both scary and vulnerable.