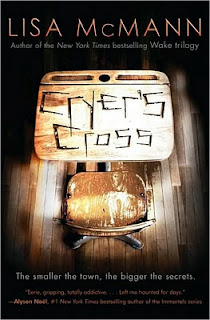 Notes: This is reviewed from an a e-galley supplied by Simon & Schuster (US). Cryer's Cross will be published in the UK as The Missing in June.

Review: Cryer's Cross is a small, rural, Montana town, the sort of place where nobody bats an eye if you ride your horse to the local store instead of taking the car.

Kendall and Nico are neighbours and have been friends since birth. As well as being best friends they have drifted into a romantic relationship. Kendall is the only girl of her age at school and she loves soccer and plays in the school team. Soccer is one of the few things that can control the wild thoughts that arise from her OCD.

Their quiet existence is disrupted by the disappearance of a younger class-mate, Tiffany Quinn. Despite a huge search, no trace of her is found. Now it's three months later and school begins once more. There is a minor excitement in the fact that there are two new students: Jacian and his younger sister Marlena.

However it's only a couple of days until Nico begins to act strangely before vanishing without trace just like Tiffany before him.

Kendall is left shocked and out of it. Her only solace is soccer and the curfew imposed on town means she spends more time playing soccer with Jacian and she begins to see the nicer guy behind the gruff exterior he presented on his arrival in Cryer's Cross.

Because of her OCD, Kendall is in a unique position to discover what has happened to the missing teenagers but the answer could come at a great cost.

Occasionally there is a paragraph from the mysterious "We" before a chapter, and these make increasingly more sense as the story progresses.

I loved Lisa McMann's Wake so I jumped at the opportunity to read Cryer's Cross. It's a gripping read with a budding romance intermingled with a dark, very creepy Tales-of-the-Unexpected horror story. I don't want to give anything away, though the cover may give you a clue, but if you are still at school, it might give you nightmares.

However there are one or two things I didn't buy totally, including the romance. Kendall is an unsophisticated, seventeen-year-old who, to me, seems a bit young for her age, whereas Jacian is a year older and seems much more grown-up. I can see why she (anyone) might fall for him, less so the other way round. Also Kendall spends several days at school just crashed out on her desk and nobody, including the teacher, intervenes or speaks to her all day. It is crucial to the plot that they don't and she is in mourning of sorts, but it still threw me out of the story a little.

I did love the small-town setting which I could picture vividly and it's refreshing for someone to have (two) normal parents like Kendall does, though running their farm keeps them out of the picture as and when required.

This is quite a different book to the supernatural YA books I've read before (I can't say any more than that for fear of spoiling it), with rather a dark tone as Kendall is wrestling with loss and disappointment pretty much the whole time, and the town is full of fear, but it's one that will pull at you until you get to the end. It has a creepy atmosphere which will linger in your mind after you've finished your visit to Cryer's Cross.

I did enjoy Cryer's Cross and though I had a couple of small issues with it, which I may be being over-sensitive about, I would definitely recommend it.
Posted by Karen (Euro Crime) at 09:25