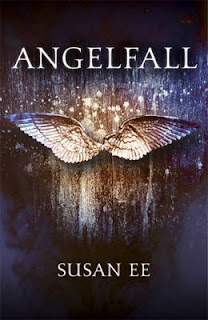 
The world is in chaos. Angels have destroyed civilisation as we know it and Penryn is living with her mentally ill mum and disabled sister Paige in a shady apartment block in Silicon Valley. One night they are about to make their escape to the country and are on the streets when several angels swoop down and have a fight amongst themselves. One angel is heavily outnumbered and is punished by having his wings cut off. When the victorious angels leave, one of them swoops up Penryn's sister and flies away with her. Penryn offers to help the de-winged angel, Raffe, get his wings reattached in return for him helping her to get her sister back. Angelfall tells of Penryn and Raffe's journey to get to the angels' headquarters, and what they see and who they meet along the way.

Angelfall is a compulsive read and you really feel that you are in this apocalyptic world. The relationship between Penryn and Raffe is a difficult one as, though he looks like a god he is one of the race that has burnt her world; and she is one of the despised humans. They have to help each other to achieve their respective goals but is that the only reason they get on quite well? With their antagonistic banter, Penryn and Raffe make an appealing pair of strong characters in a broken world.

Susan Ee's Angelfall has been an internet phenomenon and I was a little anxious about whether it would live up to the hype but it does in spades. I can't wait for the sequel, World After.

NB. I'm not sure whether Angelfall is YA (seventeen-year-old-protagonist) or adult (where it's shelved in my library) but it does contain a couple of unpleasant scenes, one involving children.
Posted by Karen (Euro Crime) at 13:54