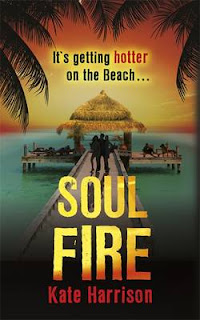 Notes: As this is the review of a second part of a trilogy it may contain spoilers for the first book, Soul Beach
.
Review: Alice continues to spend time online at the Beach where she can spend time with her murdered sister Meggie and the virtual boy in her life the American heir, Danny. In Soul Beach she was able to solve the mystery of  the death of Beach resident, Triti, which meant Triti moved on from the Beach. Alice know that if she solves Meggie's death Meggie will move on too and she, Alice, will not be allowed back to the beach and not only will she lose Meggie but Danny also.

Nonetheless in the real world she continues to suspect several of Meggie's close friends, all of whom seem keen to keep Alice in their circle. The apparent suicide of Meggie's boyfriend seems to close the police investigation into Meggie's death but Alice believes he's innocent. Especially when he turns up at the Beach.

Meggie's friends and Alice and her best friend plan a weekend break in Barcelona where they will meet up with Meggie's ex-room-mate. They are also joined by Alice's hacker friend Lewis who helped her so much in the previous book. Once in Barcelona Alice takes the opportunity to help one of the Beach's other residents.If Alice wasn't spooked enough the whole trip takes place during a Barcelona Fire Festival with firecrackers and street events leading to more confusion and a possibly fatal accident involving one of their group.

So who is following Alice? Alice begins to have a strong suspect for Meggie's murder but is she correct? Is the author leading us up a blind alley? Why does Lewis keep turning up (is it just friendship or something more sinister?) and what will happen to the Beach if/when Alice solves Meggie's murder?

There are lots of things to be tied up in the imminent Soul Storm and I have a mad theory re the Beach which I'm looking forward to seeing if it's true or not. Soul Fire is a very enjoyable follow-up to Soul Beach, full of romance, drama, tension and mystery. You do though have to go along with the whole premise that Alice can touch/feel the Beach and its residents - I wonder if the how of that will also be explained in the eagerly awaited Soul Storm.
Posted by Karen (Euro Crime) at 09:00