Review: The Mystery of the Midnight Ghost by Helen Moss 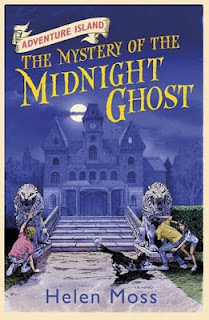 
Review: The Mystery of the Midnight Ghost is the second in the Adventure Island series and takes place a couple of weeks after The Mystery of the Whistling Caves. Brothers Scott and Jack are staying with an aunt on the Cornish island of Castle Key and have made friends with resident Emily and her talented dog Drift. They seem to have settled into their temporary life away from London.

They are all excited when filming of their favourite film franchise, the Agent Diamond series, comes to the island. The stunt co-ordinator Max is staying at the B & B Emily's parents run and he even manages to arrange a meeting between the friends and the star of the series, Savannah Shaw.

Filming is taking place at Pendragon Manor which is allegedly haunted by a witch – the rumour is that young women who appear in the witch's attic after midnight are never seen again. Then Savannah goes missing after reportedly being seen in the old house. Is there a supernatural or down-to-earth reason for her disappearance? 'Operation Lost Star' swings into action as the friends set out to find out what has happened to Savannah.

The Mystery of the Midnight Ghost is another charming adventure story with a beautiful setting which allows the children to ride around on their bikes and camp overnight on the beach without parental supervision. They also do some proper detective work – checking handwriting samples, tracking down a witness and following tyre tracks.

I chuckled quite a few times as well as Jack comes out with some great lines. The previously unshakeable Emily goes a bit weak at the knees at the thought of a ghost but she works to overcome her fear and Scott is starting to take a few more risks. I look forward to seeing how the friends' characters change. The illustrations by Leo Hartas that preface each chapter are, like the cover by Roy Knipe, very attractive.

The good news is that I have eight more of these to read, with a further four out in 2013.

My review of The Mystery of the Whistling Caves.

Guest posts by Helen Moss for Teenage Fiction For All Ages: Don't Forget Your Life Jacket and Easy as ABC.