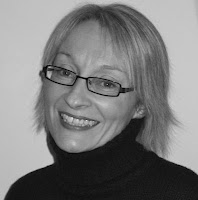 It's "crime writing month" at the moment so I'm very pleased to welcome back Helen Moss, author of the "Adventure Island" mystery series, which as of last week is now now up to ten books with, pleasingly, more to come.

Helen originally wrote a very funny piece last year about safety in fiction (and I've reviewed the first book in the series: The Mystery of the Whistling Caves).

Thank you very much for inviting me to call in at Teenage Fiction for All Ages again. Books Nine and Ten of the Adventure Island series made their appearance last week and Emily Wild finally sees two of her dreams come true - an investigation involving smugglers (The Mystery of the Smugglers’ Wreck) and a spy mystery complete with hidden codes and secret agents (The Mystery of the Invisible Spy).

So, after solving ten murky mysteries, is it time for Emily, Jack and Scott to hang up their night-vision goggles and concentrate on their schoolwork? Maybe Drift has earned a break from sniffing out clues and is ready to spend his retirement chasing rabbits?

Not while there are still dastardly deeds and shady shenanigans going on in Castle Key!

I’m hard at work on four more Adventure Island books to come out in Spring and Summer, 2013. After that, who knows? These books are so much fun to write that as long as readers still want to read them I’m more than happy to keep going . . .
Friends often ask me if it gets easier to write each book as the series goes on. In some ways, it does. It gets easier to slip back into the characters’ voices, as I know them so well. It’s also much less daunting now when I get to that point in each book (usually around the end of Chapter Five) when I have a sudden overwhelming crisis of confidence and think; There’s absolutely no way I can do this. Me? Write a whole book? That anyone would actually want to read? Who are you trying to kid? These days I can give myself a stern talking to, remind myself that this happens every time. I’ve always got through it before. I take myself off to the bookshelf. Look, you can do this! Ten Adventure Island books with your name on! Now, sit back down at that computer and stop whinging!

But there are some things that get harder with each book. Thinking of new mysteries for the intrepid Emily, Scott, Jack and Drift to solve becomes more of a challenge . . . There are, after all, only so many dubious doings that can happen on a small island off the coast of Cornwall, which could even remotely plausibly be solved by a group of kids and are not too sordid and/or boring for eight-year old readers (yep, that rules out about 99% of all real-life crimes!).

Luckily, Castle Key island does have an astonishingly high crime rate, and continues to attract a constant stream of visitors with more than their fair share of Dark Secrets, so, with the help of my wonderful editor at Orion, Amber Caraveo, who can spot a plot hole a mile off, and my husband, who has the mind of a criminal genius, we should be able to keep Emily and the boys baffled and busy through Book Fourteen and beyond.

Thinking about the ups and downs of writing a long series reminded me of one of my favourite crime writers. American author Sue Grafton set herself a formidable challenge with her alphabet series; one mystery for every letter of the alphabet; A is for Alibi, B is for Burglar and so on, through to the most recent, V is for Vengeance. All the books feature the sassy, no-nonsense private investigator, Kinsey Milhone (I have a feeling Emily Wild will be a lot like Kinsey when she grows up!).

I’ve loved following Kinsey Milhone’s cases over the years, and am full of admiration for Sue Grafton, who is now only four books away from completing her 26 book series with Z is for . . . zero or zap or zodiac. As I began to write this piece, I googled Sue Grafton’s website and was intrigued to find that she has posted her writing journal notes for several of the alphabet series; they make utterly, utterly engrossing reading for anyone who has ever tried to plot a series of mysteries, or in fact, any story at all . . . What if? Would this work? But why would anyone do that? Is that too much like what happened before? Definitely worth a look . . . http://www.suegrafton.com/journal-notes.php

Now, I’d better get back to cooking up some more trouble in Castle Key!

With many thanks to Helen and Orion Childrens.

There are currently ten books available in the Adventure Island series (with four more planned for 2013). You can read about them at the official Adventure Island website which includes a map of Castle Key Island and blogs from the main characters.

Helen Moss's own website is here.
Posted by Karen (Euro Crime) at 09:00