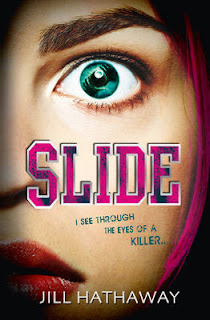 
Review: Slide is the first in a series though it stands equally well as a standalone. Sylvia aka Vee has let people believe that she suffers from narcolepsy and indeed she does drop off to sleep during class and random moments through the day. However what she hasn't told anyone, except her Dad who didn't believe her, is that when she falls asleep she slides into another person's consciousness, directed by the object she's touching at the time. Which is why when she touches the friendship bracelet made by a friend of her sister's she ends up in the girl's bedroom watching her sobbing her heart out and when she touches a mysterious note left on her front door she sees through a killer's eyes.

Vee is the only one who knows that the death of a cheerleader isn't suicide but she cannot tell anyone, instead she must try and find the truth and the killer. In addition, she wants to confide in her best friend Rollins but is worried he'll think she's crazy and she is falling for new boy Zane.

Another death pushes Vee to be more proactive in her search for the killer and use her “gift” to do some good.

I enjoyed Slide though it's not quite what I thought it was going to be. The premise does sound a bit like the Wake series by Lisa McMann but whereas Janie in that series is pulled into people's dreams, from being awake, Vee falls asleep and is pulled into people who are awake. I had expected Slide to be more of a crime novel with Vee doing some detecting, a bit like Hartley does in Deadly Cool by Gemma Halliday and she does do some investigating but quite late in the day. Slide is more concerned with the nature of friendship and loss and guilt and what the death of a family member can do to the survivors' family and I did find it quite moving at times. Slide is a fast-paced read and I look forward to the sequel in 2013.