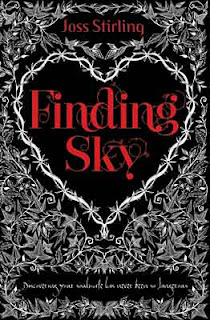 First Line: The car drew away, leaving the little girl on the verge.

Review: I loved Finding Sky so much I kept putting it down so I didn't get to the end.

Sky Bright moves from Richmond (England) with her adoptive parents Sally and Simon to Wrickenridge in Colorado where her artistic parents have a one year job as artists-in-residence in the new arts centre.

Sky was abandoned at an early age and went through many homes and foster carers, with no memory of who she was and unable to speak, until the Brights rescued her. Sky is quite reserved and fights to remain normal, as from time to time she sees coloured auras around people, which she suppresses.

She hasn't been at school long until, Zed Benedict, the bad boy of the school catches her eye. He takes little interest in her until she ticks him off in front of his friends and then a football match where he allows her to make a save makes him realise that Sky's his destiny. For Zed is a savant and he must make Sky realise that she is his soulfinder, the one that will complement and complete him. Sky struggles with this knowledge and becomes embroiled in the dangerous secrets of Zed's family, which leads to violence and pain. Will Sky accept the truth about herself and Zed or will she run from the possibility of getting emotionally hurt again?

By inventing the concept of a soulfinder, the author gives a good reason why her couple should stay together forever, as it's mentioned a couple of times that teenage sweetheart relationships often don't last. The banter between Zed and Sky seems very natural and sweet. They seem quite mature for their age as they have had to grow up early with what they've both seen and gone through.

Along with the great central relationship, there is the mythology of the savants (these savants are not like Dustin Hoffman in Rain Man) - whose skills include telepathy and telekinesis. There are also action sequences with some serious bad guys, which are rather scary. I liked how the author didn't make Sky a "superhero" at the first opportunity, rather, allowing Sky to find her own way at a slower pace. I loved the setting of the Rockies where we get Sky's English perspective on an American setting. I loved her new friends who were incredibly supportive of the new girl. Basically I loved this book and it's one of my, if not the, favourite reads of 2010. There is to be a sequel, set in the same universe - Zed has six brothers and the next book I understand is about his older brother, Yves.

Joss Stirling is a pen-name for Julia Golding who also writes as Eve Edwards.