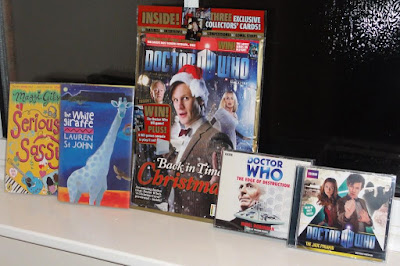 In my quest for a "happy" book for the children's reading group I'm involved in (10-12 year olds) I asked on twitter for suggestions. One of which was The White Giraffe. I've reserved a couple of other titles which haven't arrived yet. More suggestions welcomed of course.
I've not read them yet:

Seriously Sassy by Maggi Gibson (may be too girly for the group)
Thirteen-year-old Sassy is a true twenty-first century girl. She's puzzling out the mysteries of parents, boys and why people can't be more like dolphins, and confronting big questions like . . . Can she become a singer–songwriter and save the world too? (More importantly, can she get Dad to pay for a demo?) Should she trust her dolly-goth best friend to give her a makeover without making her look like one of the undead? And does sharing a chocolate chip muffin with Magnus Menzies mean true love, or just a mid-morning snack . . .?

The White Giraffe by Lauren St John
When she is eleven years old, Martine is orphaned and sent to live with her grandmother on a game reserve in South Africa. Her grandmother seems strangely unwelcoming and Martine has a difficult time settling in at her new school, where she is conspicuously an outsider. But she has an ally in Tendai - one of the keepers on the reserve, from whom she learns the lore and survival techniques of the bush, and in Grace - who instantly senses there is something special about Martine. There are secrets about Sawubona (the reserve) just waiting to be revealed, and rumours too about a fabled white giraffe - a trophy for hunters everywhere. One night Martine, lonely and feeling slightly rebellious too, looks out of her window and see a young albino giraffe - silver, tinged with cinnamon in the moonlight. This is the beginning of her mysterious and magical adventures - her discovery of her gift of healing and a secret valley that she travels to with the giraffe, where she'll find clues about her past and future. Above all it's is a heart-warming story, full of charm and atmosphere, and Martine's sheer delight in her giraffe friend and the fantastic landscape which is theirs to explore.

Doctor Who: The Jade Pyramid by Martin Day, read by Matt Smith (6 Jan 2011, AudioGo)
Matt Smith reads this exclusive audio story featuring the Eleventh Doctor and Amy Pond. Intercepting a distress call, the TARDIS is drawn to a Shinto shrine in medieval Japan, where the Doctor and Amy are met by village elder Shijo Sada. He explains that the ogre-like mannequins surrounding the holy site are harmless guardians, called Otoroshi. At the heart of the temple is an ancient jade pyramid, so sacred that only the monks may look at it. But the Shogun, the ruler of Japan, wants to possess the pyramid and has ordered seven samurai and a band of soldiers to come to Kokan and seize it. Whilst the Doctor is tracked by a ninja assassin, Amy discovers what happens to trespassers at the shrine. Soon the secrets of the jade pyramid - and the towering Otoroshi - will be known...Written specially for audio by Martin Day

Doctor Who: The Edge of Destruction by Nigel Robinson, read by William Russell (6 Jan 2011, AudioGo)
In a final bid to regain control of the TARDIS' faulty control system the Doctor is driven to experiment with a dangerous untried combination. With a violent explosion the TARDIS blacks out and the crew find themselves trapped inside. A simple technical fault? Sabotage? Or something even more sinister? Tension mounts as the Doctor and his companions begin to suspect one another. What has happened to the TARDIS? Slowly a terrifying suspicion dawns. Has the TARDIS become the prisoner of some powerful fifth intelligence which is even now haunting the time-machine's dark and gloomy corridors? William Russell, who played the Doctor's companion Ian in the original TV serial, reads Nigel Robinson's complete and unabridged novelisation, first published by Target Books in 1988.
Posted by Karen (Euro Crime) at 19:40