My place of work (library) has recently set up a reading group for children. So far we have 10 girls aged 9-12. At the second meeting they took a copy of Ghost Writer by Julia Jarman which is a standalone title. 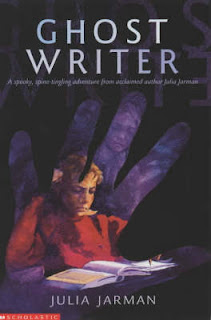 My review: I chose this title as the group had asked for a 'spooky' read and by luck on my part is was also relevant for National Anti-Bullying week.

Frankie Ruggles is a bright lad who happens to be dyslexic and he has not been given the support at school that he needs and consequently has moved school countless times until he arrives at St. Olafs in a small town.

He soon settles in there and makes friends but the room his class has their lessons in is said to be haunted and as the ghost is seeking Frankie out. Not only does Frankie have to work out what the ghost is trying to tell him but he has to contend with a bullying, unsympathetic teacher called Miss Bulpit.

The children should love the ghost-y side to this story but I was fascinated by the descriptions of Frankie's dyslexia and how the letters rearrange themselves before his eyes and how his visual imagination conjures up pictures when someone says a phrase eg skeletons in the closet - he actually sees the bones in his mind's eye. Ghost Writer has really brought home to me how difficult reading and writing can be if you are dyslexic.

Now what did the children think?
I think I underestimated how scary this book was for the age group who were reading it. Several of them stopped when a dead body was found. If you've read it you'll know what I mean! I think it was a bit too grim for them. Though my library classed it in the 7-12 section, perhaps it's more suitable for teenagers. I definitely enjoyed it more than they did.

Next time: The Boy Who Fell Down Exit 43 by Harriet Goodwin and Winging It by Annie Dalton.
Posted by Karen (Euro Crime) at 15:50