Some long awaited reservations arrived at the library last week. 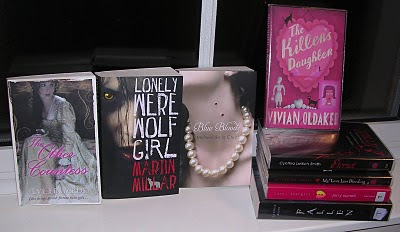 My Love Lies Bleeding by Alyxandra Harvey
The Blakes are rather different to your usual neighbours. They are vampires and some of the members of the family date back to the twelfth century. One of the children, Solange, is the only born female vampire known and, as such, she poses a direct threat to the vampire queen. Her best friend Lucy is human, and when Solange is kidnapped Lucy and Solange's brother, Nicholas, set out to save her. Lucy soon discovers that she would like to be more than just friends with Nicholas. But how does one go about dating a vampire? Meanwhile, Solange finds an unlikely ally in Kieran, a vampire slayer on the hunt for his father's killer.

Fallen by Kate Lauren
What if the person you were meant to be with could never be yours? 17-year-old Lucinda falls in love with a gorgeous, intelligent boy, Daniel, at her new school, the grim, foreboding Sword & Cross ...only to find out that Daniel is a fallen angel, and that they have spent lifetimes finding and losing one another as good & evil forces plot to keep them apart. Some angels are destined to fall...

The Killer's Daughter by Vivian Oldaker
Emma's life has been turned upside down since her father was accused of murdering her grandmother in Kalos, Greece. Although he was found not guilty, the accusation haunts the family, and they relocate to Wessex in an attempt to make a fresh start. But news of the family's history has travelled with them, and Emma becomes the target of vicious bullies at school. Enough is finally enough, and Emma secretly hatches a plan to visit Kalos to find the truth and try to clear her father's name. But, as the plot begins to thicken, Emma finds herself in grave danger...

Eternal by Cynthia Leitich Smith
CLASSIFIED ADS: WANTED Personal assistant to Her Royal Highness. Duties: Whatever is asked, without hesitation, including but not limited to secretarial / administrative, household, defence, blood donation, driving, companionship, prey disposal, and love slavery. At last, Miranda is the life of the party: all she had to do was die. Elevated and adopted by none other than the reigning King of the Mantle of Dracul, Miranda goes from high school theatre wannabe to glamorous royal fiend overnight. Meanwhile, Zachary, her reckless and adoring guardian angel, demoted to human guise as the princess’s personal assistant, must try to save his girl’s soul before all hell arrives, quite literally, on their castle doorstep. In alternating points of view, vampire Miranda and angel Zachary navigate a cut-throat eternal aristocracy as they play out a dangerous love story for the ages.

Love, Stargirl by Jerry Spinelli
By award-winning author Jerry Spinelli, the story of Stargirl continues...
In the form of letters to Leo, written over the course of a year, this moving and lyrical book charts Stargirl's feelings as she comes to terms with the loss of Leo and starts to make new friends.

Blue Bloods by Melissa de la Cruz (finished copy) out 1 March (UK)
They're Young, Fabulous and Fanged...And they rule Manhattan from the trendy uptown clubs to the downtown boutiques. Fifteen-year-old Schuyler Van Alen has never quite fit in at her exclusive prep school - she's more of a vintage than a Versace girl - but all that's about to change...Because Schuyler has just found out she's a Blue Blood. The Blue Bloods are the city's glamorous and secret vampire elite. They're young, beautiful and powerful. But now they're being murdered. And Schuyler must find out who - or what - is behind it before she's next.

The Other Countess by Eve Edwards (UK debut author?) out in July
It's 1582 and eighteen-year-old Will Lacey's family is in trouble. After years of wasteful spending, his late father has run Lacey Hall to near ruin. Tasked with marrying his family back into fortune, the new Earl of Dorset is all set for a season at court to woo not just the Queen but potential brides with his jousting skills. But when Ellie – a strong-willed girl with nothing to her name but a worthless Spanish title – catches Will's eye, he faces a bigger battle than he could ever have anticipated.

Lonely Werewolf Girl by Martin Millar out in March
As teenage werewolf Kalix MacRinnalch is pursued through the streets of London by murderous hunters, her sister, the Werewolf Enchantress, is busy designing clothes for the Fire Queen. Meanwhile, in the Scottish Highlands, the MacRinnalch Clan is plotting and feuding after the head of the clan suddenly dies intestate. As the court intrigue threatens to explode in all-out civil war, the competing factions determine that Kalix is the swing vote necessary to assume leadership of the clan. Unfortunately, Kalix isn't really into clan politics - laudanum's more her thing. But what's even more unfortunate is that Kalix is the reason the head of the clan ended up dead, which is why she's now on the run in London ...

I downloaded Vampirates: Demons of the Ocean.
Posted by Karen (Euro Crime) at 19:32