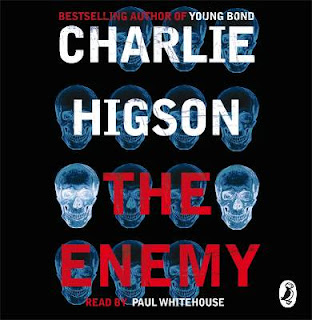 First Line:
Small Sam was playing in the car park behind Waitrose when the grown-ups took him.

Review: An unknown catastrophe has hit the world and all people over the age of fourteen have become ill and either died or become zombie-like shadows of themselves: slow and stupid. The grown-ups attack the remaining children and take them for food. The children we meet first in The Enemy are the Waitrose group, a collection of children living in Waitrose in Holloway who rely on food found by a daily scavenging party. There is a similar group at the Morrisons. Over a year has passed since the world changed and it's getting harder all the time to keep going. After a terrible day of fighting and losing friends, the Waitrose group rescue a boy called Jester who brings news of a safe place in the centre of London. And so both supermarket groups join together and seek out the promised land.

The story switches between the quest and the many trials the enlarged group has to get through, plus the stories of two of the group who have been left behind - one voluntarily and one thought dead.

But what lies at the 'safe place' and is there a catch?

There is much fighting in this book and much as in 24 no characters are bullet-proof and characters you like and sympathise with will die along the way. There are lots of gross descriptions of oozing bodies and skin complaints which should appeal to the boys and there are some strong female characters whom girls can identify with. I can easily picture the deserted London portrayed in the book. The Enemy illustrates the debt children owe parents in keeping them safe and taking all the burdens from them.

This is an unrelentingly tense tale, well narrated by Paul Whitehouse who makes each character readily identifiable by their accent alone. I think The Enemy will appeal to fans of Michael Grant's Gone series and it's also intended to be a multi-part series. I look forward to book two: The Dead.

Cover: The cover's the same as the print book.
Posted by Karen (Euro Crime) at 09:36