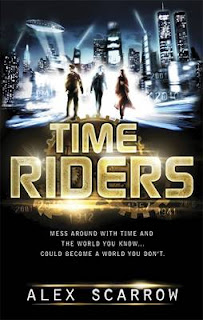 Review: The three main teenage characters are plucked from certain death by a mysterious man who appears moments before their demise and says that he can save them. Liam from 1912, Maddy from 2010 and Sal from 2026 have been recruited as TimeRiders. Their job is to make sure that time is not interfered with. Their field office is in New York and is contained in a time-bubble which constantly cycles through the 10th and 11th of September 2001.

The three have been chosen for their special skills: Liam's quick wittedness, Maddy's computer expertise and Sal's pattern-recognition ability. They are guided by the mysterious man, Foster and are joined by a cloned human fighting machine with a computer chip for a brain, nick-named Bob.

They have not had much training before a major shift in history changes the word they live in and so begins Liam and Bob's first mission: to find out how the Nazis won the Second World War - but it turns out there's an event even worse than that. Can the team correct history and at what cost to themselves?

I love time-travel books and tv-series though it makes my head hurt to think too much about the concept and TimeRiders is an enjoyable addition to the genre. [If like me, you're an older reader of teenage fiction you might remember Jean-Claude Van Damme's best film Timecop (and his eye-watering splits demonstration) which was followed by a short tv-series.] The three main characters are instantly likeable - though as Liam is the operative we get to know him a bit better than Sal and Maddy. TimeRiders also painlessly introduces or refreshes the reader's knowledge about some significant events in 20th Century history including: the Titanic, the JFK assassination, World War Two and 9/11. Constructed of mainly short-ish chapters switching between different time periods and narrators, this is a quick read and a scary one in parts. This is the first of a projected nine book series with the second, TimeRiders: Day of the Predator, due out in August 2010 and I'm looking forward to it.

Cover: I've been reading a proof which has a different cover to the final version and from the picture above it looks like an enticing movie-poster and shows the three main characters. I'd definitely pick it up!
Posted by Karen (Euro Crime) at 13:52