Due to camera fail, I'm still borrowing pictures and descriptions off Waterstone's. 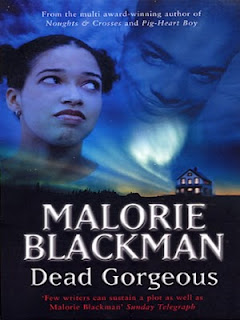 Dead Gorgeous by Malorie Blackman
A tragi-comic mystery story from a best-selling author. Life is tough for Nova. Her frantic parents are obsessed by running their hotel and her older sister seems too grown-up and good-looking to spend time with her any more. Then Nova meets the gorgeous Liam and things start to look up. But Liam is having an even worse time than she is. He's permanently stuck at the hotel and he can't attract his brother's attention either. At least Liam can see how hard Nova is struggling - and, in fact, she's the only one who can see him at all! Could a new friendship between them help them both see the light at the end of the tunnel? A truly thought-provoking and entertaining black comedy from the very talented author of Pig-Heart Boy and, for older readers, Noughts and Crosses. 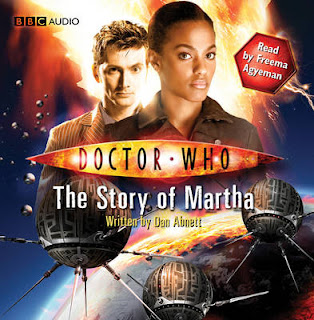 The Story of Martha by Dan Abnett
For a year, while the Master ruled over the Earth, Martha Jones travelled the world telling people stories about the Doctor. She told people of how the Doctor has saved them before, and how he will save them again. This is that story. It tells of Martha's travels from her arrival on Earth as the Toclafane attacked and decimated the population through to her return to Britain to face the Master. It tells how she spread the word and told people about the Doctor. The story of how she survived that terrible year. Featuring the Doctor and Martha as played by David Tennant and Freema Agyeman in the hit series from BBC Television, "The Story of Martha" is read by Freema Agyeman.

[I reviewed the print book of this last year but this is an abridged version which has, I think, removed the bits I was less keen on.) 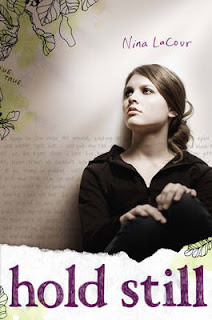 Hold Still by Nina LaCour
An arresting story about starting over after a friend’s suicide, froma breakthrough new voice in YA fiction.

dear caitlin, there are so many things that i want so badly to tell you but i just can’t.

Devastating, hopeful, hopeless, playful . . . in words and illustrations, Ingrid left behind a painful farewell in her journal for Caitlin. Now Caitlin is left alone, by loss and by choice, struggling to find renewed hope in the wake of her best friend’s suicide. With the help of family and newfound friends, Caitlin will encounter first love, broaden her horizons, and start to realize that true friendship didn’t die with Ingrid. And the journal which once seemed only to chronicle Ingrid’s descent into depression, becomes the tool by which Caitlin once again reaches out to all those who loved Ingrid—and Caitlin herself. 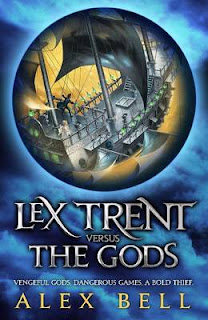 Lex Trent versus The Gods by Alex Bell (out now in the UK)
A quirky and original comic fantasy from talented Gollancz author Alex Bell Law student Lex Trent's world is inhabited by fearsome magicians, ageing crones and a menagerie of Gods and Goddesses. And while Lex is seemingly dedicated to his legal studies he's always enjoyed a challenge -- which is why he leads a double life as the notorious cat burglar 'The Shadowman' who has been (luckily) evading capture for years. But Lex's luck is about to run out because the Goddess of Fortune has selected him to be her player in the highly dangerous Games. Losing is not an option for Lex (particularly as it so often involves dying) but can he really win each of the perilous rounds? Given that the reward for doing so is money, fame and glory -- all things that Lex is quite keen on -- he's going to do whatever it takes to make sure he will...and he's certainly got good experience of cheating.

The Oracle of Dating by Allison van Diepen (e-review copy, out 1 May in the US)
No one at Kayla’s school knows she’s the famous Oracle of Dating—the anonymous queen of dating advice, given through her own Web site. Kayla doesn’t even have a boyfriend. Two relationship disasters were enough to make her focus on everyone else’s love life. But then her advice backfires on her own best friend. And Kayla starts to seriously obsess about Jared Stewart—the very cute, very mysterious new guy in school. Suddenly, the teen queen of advice needs her own oracle of dating--and she knows just where to find one...
Posted by Karen (Euro Crime) at 21:09