Review: The Vanishing of Katharina Linden by Helen Grant 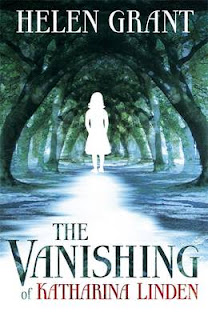 First Line: My life might have been different had I not been known as the girl whose grandmother exploded.

Review: Ten-year-old Pia Kolvenbach lives in Bad Munstereifel, an historic, small, German town where everyone knows everything about everyone else. Her mum is English, her dad German. Whilst celebrating Advent an unfortunate accident leads to Pia's grandmother, Oma Kristel, setting herself on fire. Rumours soon circulate that Oma Kristel exploded and Pia becomes shunned by her friends. Her only ally is StinkStefan a boy nobody likes.

By necessity Pia and Stefan hang around together and Pia introduces him to Herr Schiller, an old resident of the town with an endless supply of local ghost and horror stories for them.

Then another tragedy strikes; during the parade to celebrate the end of Karneval, a young girl similar in age to Pia, called Katharina Linden, just vanishes.

Pia and Stefan want to find out what happened to Katharina, especially as more tragedies occur but it takes a life-changing event to Pia to force the pair to commit a daring act of breaking and entering which will lead them to the truth.

I really enjoyed The Vanishing of Katharina Linden. It's a book to savour. The story is narrated by an older Pia so the vocabulary and style is more mature than you might first expect. She makes for an amusing narrator such as in her descriptions of some of the old battleaxes in the town. For example of the town gossip, Frau Kessel:

She had a mass of pure white hair that had become as thin and gauzy as candyfloss; she habitually wore it piled on top of her head. Today it had been backcombed and stacked up so high that she had rather a Marie-Antoinette effect.

A wrinkled hand embossed all over with rings...

...but now she had sailed off like a little ship laden with Pandora's boxes of other people's secrets.

The book has a fairy tale feel to it but not in a Disney way, more Brothers Grimm. The girl's disappearance leaves parents very protective but there is also a claustrophobic and creepy atmosphere provided by the bad weather and reinforced by the tales from Herr Schiller. Some of his tales are quite scary. Indeed there are a couple of unpleasant scenes near the end of the book which could possibly lead to nightmares for younger readers.

The Vanishing of Katharina Linden is not full of action but it is engrossing. This difficult year for Pia holds the reader's attention and the non US/UK setting of Germany provides additional interest. An amazing debut by Helen Grant which can be enjoyed by both adults and older teenagers.

The Vanishing of Katharina Linden has been longlisted for the 2009 Booktrust Teenage Prize.

Bad Munstereifel is a real place and looks beautiful.

Cover: An eye catching title and cover made me pick this one up. I like crime fiction so the title attracted me. Katharina disappears from the town centre so the cover is not strictly accurate but does match the creepy mood of the story.
Posted by Karen (Euro Crime) at 12:20