Review: The Summoning by Kelley Armstrong 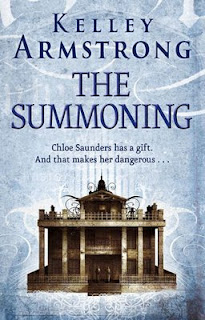 First Line: (from Prologue)
Mommy forgot to warn the new babysitter about the basement.

Review: The Summoning is the first part in the Darkest Powers trilogy. Part two, The Awakening, is also available with the final part, The Reckoning, out next May.

Fifteen-year-old Chloe Saunders is being driven to school when she sees a boy run out in front of the car. Except that he's not there. At school she's chased by a burnt janitor that no-one else can see. Her aunt, who is also her doctor, ships Chloe off to a group home, Lyle House, to get some rest and possibly treatment. The psychiatrist there soon diagnoses Chloe as having schizophrenia - much more plausible than an ability to see ghosts.

Chloe's fellow detainees include surly Derek and his foster brother, the superficial seeming Simon, catty Tori and the friendly Rae and Liz. Liz reveals that she has a poltergeist getting her into trouble and asks for help from Chloe. This request sets off a chain of events which lead Chloe to the realisation that her new friends have rather a lot in common with her. How have they all ended up in Lyle House? Is there something sinister going on?

The Summoning proceeds at a steady pace with any action mostly contained to the several floors of Lyle House. Though I didn't feel a great deal happened (it's 400 pages long), I was never bored and am now eager to get onto the next book. The main characters are introduced and their 'skills' revealed, as are their family situations. Characters, who at first seem not so likeable become the ones you really must have in the next book(s). I was getting quite panicky towards the end wondering if a certain character would be in The Awakening.

I really enjoyed The Summoning and with its cliff-hanger ending, it's probably best if you have #2 to hand!

Cover: The book came highly recommended so the cover didn't influence me to pick it up. This version does imply that it is YA as - on the actual cover it says "Young Chloe Saunders has a gift..."

Though this is a YA/Teenage series it can be found in various sections in bookshops eg paranormal romance (Borders) and horror (Waterstone's) in Birmingham at least!
Posted by Karen (Euro Crime) at 09:25