Review: Between the Lines by Jodi Picoult & Samantha van Leer 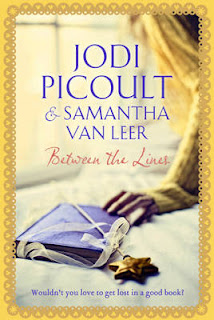 
Review: Between the Lines is a joint production by best-seller author Jodi Picoult and her daughter Samantha van Leer. It's a fairytale about a fairytale.

Fifteen-year-old Delilah has an unhappy school-life after accidentally hurting the most popular cheerleader. She has one best friend and lives with her mum after their dad left them to have a second wife and family. She is obsessed with the fairytale book Between the Lines which she found in the school library, and relates to the handsome prince, Oliver, as he also has no father. What she doesn't know, at first, is that the characters in the book lead their own lives when not being read and Oliver wants out of the story and into Delilah's world. Up until now no-one has been able to hear Oliver's pleas until Delilah notices that a drawing has changed in the book. And then Oliver is able to communicate with her. They then spend all available time trying to work out how Oliver can join Delilah.

The story alternates between the point of view of Oliver, Delilah and excerpts from the fairytale which Oliver is enacting over and over again.

The first thing to mention is how gorgeous the book is. It has a pretty cover of course but it also has thick paper and beautiful full-page colour illustrations at the beginning of the excerpts and smaller black illustrations throughout the text. The only thing missing is a built in silk-bookmark.

I enjoyed Between the Lines. It's probably aimed at the younger end of the teenage age-rage and is charming and I enjoyed the humour in it. I found the pace flagged temporarily about half-way as one attempt after another failed to extract Oliver and I began to muse on some of what I thought were inconsistencies in his knowledge, but that's probably just me. I loved the fairytale that Oliver was in which has some unusual elements and the fact that the characters had completely different personalities when they weren't “on-stage”. This was a good story idea and I look forward to more YA books from the authors either singularly or jointly.
Posted by Karen (Euro Crime) at 11:32