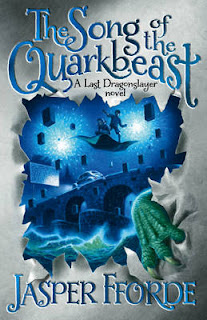 Jasper Fforde - The Song of the Quarkbeast: A Last Dragonslayer Novel (10th)
A long time ago magic faded away, leaving behind only yo-yos, the extremely useful compass-pointing-to-North enchantment and the spell that keep bicycles from falling over. Things are about to change. Magical power is on the rise and King Snodd IV of Hereford has realised that he who controls magic controls almost anything. One person stands between Snodd and his plans for power and riches beyond the wildest dreams of avarice. Meet Jennifer Strange, sixteen-year-old acting manager of Kazam, the employment agency for sorcerers and soothsayers. With only one functioning wizard and her faithful assistant 'Tiger' Prawns, Jennifer must use every ounce of ingenuity to derail King Snodd's plans. It may involve a trip on a magic carpet at the speed of sound to the Troll Wall, the mysterious Transient Moose, and a powerless sorceress named Once Magnificent Boo. But one thing is certain: Jennifer Strange will not relinquish the noble powers of magic to big business and commerce without a fight. 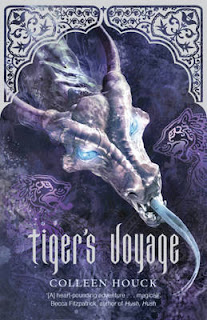 Colleen Houck - Tiger's Voyage (10th)
With the head-to-head battle against the villainous Lokesh behind her, Kelsey confronts a new heartbreak: in the wake of his traumatic experience, her beloved Ren no longer remembers who she is. As the trio continues their quest by challenging five cunning and duplicitous dragons, Ren and Kishan once more vie for her affections - leaving Kelsey more confused than ever. Fraught with danger, filled with magic, and packed with romance, Tiger's Voyage brings Kelsey and her two tiger princes one step closer to breaking the curse. 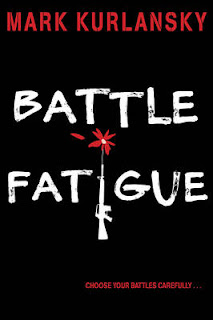 Mark Kurlansky - Battle Fatigue (7th)
Growing up in the years following World War II, Joel Bloom always played soldiers with his friends. But by the time he's eighteen, the Vietnam War is in full swing, and it's not as simple as the war games he played when he was a child. Old enough to be drafted, Joel loves his country, but he knows that fighting in an unjust war isn't something he can do. After trying and failing to be a conscientious objector he leaves for Canada - a decision that will help him avoid the physical conflict of the war, but will create another inside of him that will take much longer to resolve. An insightful and compelling novel that explores one boy's struggle to understand himself and the harsh realities of life during wartime. 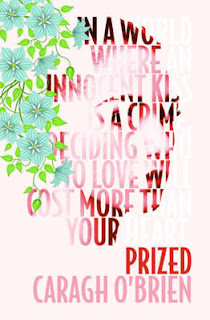 Caragh M O'Brien - Birthmarked: Prized (10th)
Having escaped from the corrupt Enclave, Gaia ventures into the wasteland with her baby sister, Maya, hoping to find a settlement that's rumoured to lie in the Dead Forest. After days of travelling, Gaia is close to death when Peter, a ranger from the mysterious village of Sylum, finds her and takes her back with him. Gaia soon realises that Sylum has as many strict laws as the Enclave she fled from, but when Maya is taken from her by the ruthless village leader, the Matrarc, Gaia is forced to stay and submit to their strict social code, or risk losing her sister forever. But Sylum is in trouble. The population is falling and the amount of women dwindling dramatically, and with a deadly fever affecting striking down anyone who tries to leave, the future is bleak for the village. Desperate to escape with her sister, Gaia is determined to uncover the secrets of the village, whatever it takes. And when Leon is captured too, Gaia is faced with another tough choice between the boy who captured her heart in the Enclave, and Peter, for whom she can't deny her growing feelings. But when the decisions you make affect the lives of everyone around you, how can you be sure you're making the right choices? 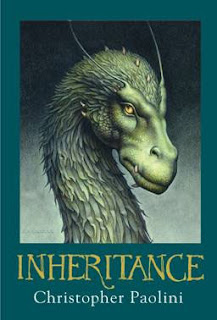 Christopher Paolini - Inheritance (8th)
Not so very long ago, Eragon - Shadeslayer, Dragon Rider - was nothing more than a poor farm boy, and his dragon, Saphira, only a blue stone in the forest. Now, the fate of an entire civilization rests on their shoulders. Long months of training and battle have brought victories and hope, but they have also brought heartbreaking loss. And still the real battle lies ahead: they must confront Galbatorix. When they do, they will have to be strong enough to defeat him. And if they cannot, no one can. There will be no second chances. The Rider and his dragon have come farther than anyone dared to hope. But can they topple the evil king and restore justice to Alagaesia? And if so, at what cost? Featuring spectacular artwork by cult artist John Jude Palencar, this stunning book brings the bestselling "Inheritance" cycle to a breathtaking conclusion. 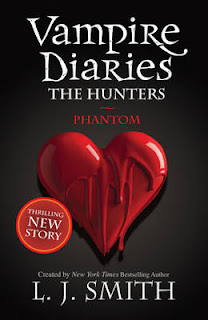 L J Smith - Vampire Diaries: Phantom (10th)
Since meeting vampire brothers, Stefan and Damon Salvatore, Elena Gilbert has been to hell and back. Now that she and her friends have saved their hometown from a demonic spirit, everything can finally go back to normal. But Elena should know better than anyone that Fell's Church will never be normal. In PHANTOM, a dangerous new other-worldly threat sets its sights on Elena. And this time she can only count on one Salvatore brother to protect her.
Posted by Karen (Euro Crime) at 13:23