In alphabetical order by author, here are the new YA releases published in the UK this week (that I know about), lots today - which will you be buying/reading?: 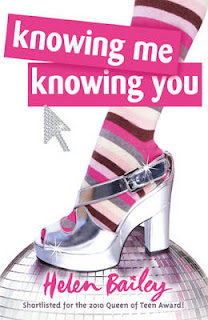 Helen Bailey - Knowing Me, Knowing You (3rd)
Chantelle 'Channy' Allen is just about enduring her slightly bored teenage existence - trying not to die of embarrassment every time her parents' Abba tribute band peform a cringing medley of hits in front of all her friends...But then Channy finds out something that turns her world upside down; something that makes perfect sense, but at the same time seems utterly ridiculous. Something that Channy is intent on investigating - despite the distraction of gorgeous French exchange student Antoine. Channy's about to learn a valuable life lesson: sometimes CURIOSITY is a dangerous thing... 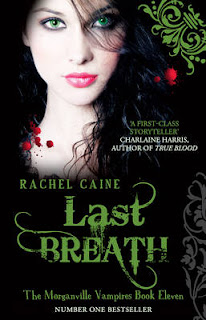 Rachel Caine - Last Breath (1st)
INCLUDES A BRAND NEW AND EXCLUSIVE MORGANVILLE SHORT STORY Claire Danvers is concerned when three vampires vanish from Morganville without a trace. The last person seen with them is someone new to town - a mysterious individual named Magnus. Claire is convinced creepy Magnus isn't human ...but is he a vampire, or something else entirely? Claire's hunt for answers leads her to solving another mystery that's long been puzzling her: why do vampires live so far out in a sunny desert when they're sensitive to sunlight? The answer has nothing to do with sunlight, but with water - and an ancient enemy who has finally found a way to invade the vampires' landlocked community. Vampires aren't the top predator on earth. There's something worse that preys on them ...something much worse. Which means if Claire, and Morganville, want to live, they will have to fight on to the last breath ... 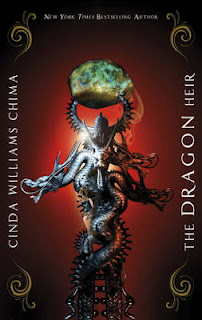 Cinda Williams Chima - The Dragon Heir (3rd)
For centuries, wizards have avoided making war on each other for fear of waking the legendary dragon that sleeps at Raven's Ghyll. But it is a new age. The patriarch Nicodemus Snowbeard is rapidly failing. The Wizard Houses of the Red and White Rose have united against Claude D'Orsay, Master of Games and keeper of the Dragonhold, and a moment when he and and his sadistic son Devereaux seem poised to seize control of all of the magical guilds. But then everything changes ...Jason Haley has been trying to be part of the action for months: he wants to help, but no one seems prepared to let him in. Seph is monitoring the defensive walls. Jack and Ellen are training their ghost army, even his Anaweir friends are doing their bit to help. Only Jason seems to be left out - until he stumbles across a powerful talisman, called the Dragonheart, hidden away in a cave. It seems to sing to Jason, its power calling to him. Perhaps, finally, he's going to be able to help. The final battle is coming, and the magical community of Trinity is about to risk the destruction of everything they care about in order to remain free. The outcome is balanced on a knife edge, and the slightest advantage could turn the tide. If Jason can help, if the moody and mysterious Madison Moss can be persuaded to join the Weirguilds before it's too late, and if the friends who make Trinity a place worth fighting for remain true ... 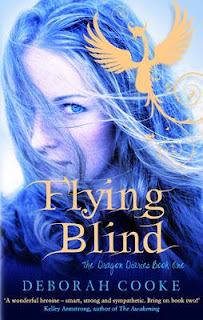 Deborah Cooke - Flying Blind (31st)
I will shift shape and I will cast dreams and I will be everything that I am forecast to be. I am the Wyvern. And I will claim my birthright, right here and now. Zoe Sorensson is a perfectly normal teenage girl. That's the problem. She's always been told she's destined for great things - she is a dragon shape shifter, a Pyr, and the only female one of her kind. But Zoe's powers are AWOL, so she's sent to Pyr boot camp. Zoe quickly realizes that she has to master her powers yesterday, because the Pyr are in danger and boot camp is a trap. The Mages want to eliminate all shifters and the Pyr are next in line -unless Zoe and her friends can work together and save their own kind. 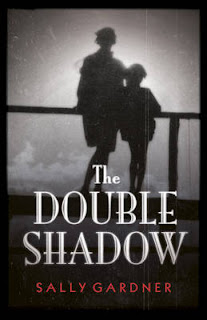 Sally Gardner - The Double Shadow (3rd)
Arnold Ruben has created a memory machine, a utopia housed in a picture palace, where the happiest memories replay forever, a haven in which he and his precious daughter can shelter from the war-clouds gathering over 1937 Britain. But on the day of her seventeenth birthday Amaryllis leaves Warlock Hall and the world she has known and wakes to find herself in a desolate and disturbing place. Something has gone terribly wrong with her father's plan. Against the tense backdrop of the second World War Sally Gardner explores families and what binds them, fathers and daughters, past histories, passions and cruelty, love and devastation in a novel rich in character and beautifully crafted. 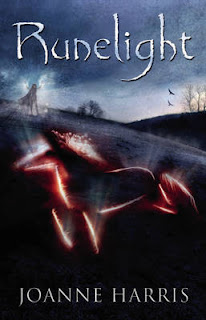 Joanne Harris - Runelight (3rd)
The squabbling Norse gods and goddesses of Runemarks are back! And there's a feisty new heroine on the scene: Maggie, a girl the same age as Maddy but brought up a world apart - literally, in World's End, the focus of the Order in which Maddy was raised. Now the Order is destroyed, Chaos is filling the vacuum left behind...and is breaching the everyday world. A chilling prophecy from the Oracle. A conflict between two girls. And with just twelve days to stave off the Apocalypse, carnage is about to be unleashed ... 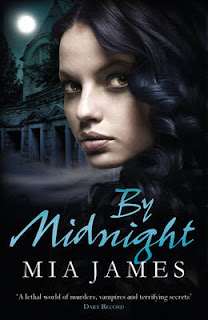 Mia James - By Midnight (3rd)
April Dunne is not impressed. She's had to move from Edinburgh to Highgate, London, with her parents. She's left her friends - and her entire life - behind. She has to start at a new school and, worst of all, now she's stuck in a creepy old dump of a house which doesn't even have proper mobile phone reception. Ravenwood, her new school, is a prestigious academy for gifted (financially or academically) students - and the only place her parents could find her a place, in the middle of term, in the middle of London, on incredibly short notice. So she's stuck with the super-rich, and the super-smart ...and trying to fit in when the rest of the students seem to be more glamorous, smarter, or more talented than she is, is more than tough. It's intimidating and isolating, even when she finds a friend in the conspiracy-theorist Caro Jackson - and perhaps finds something more than friendship in the gorgeous, mysterious Gabriel Swift. But there's more going on at Ravenwood than meets the eye. Practical jokes on new students are normal, but when Gabriel saves her from ...something ...in Highgate Cemetery, and then she discovers that a murder took place just yards away from where she had been standing, April has to wonder if something more sinister is going on. ..and whether or not she's going to live through it ... 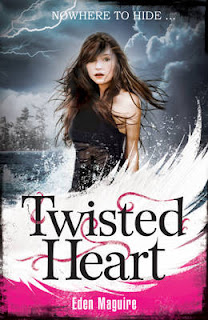 Eden Maguire - Twisted Heart (3rd)
'We will all rise,' Zoran warned while all around him burned. 'There will be other times, other places - a million other willing souls!' With a heart twisted by the lust for new lovers to destroy, new souls to connquer and a desire for revenge against Tania, the Dark Angel can take any shape, inhabit any body. He will lie low until the time is right. The battle against the Dark Angel isn't over. 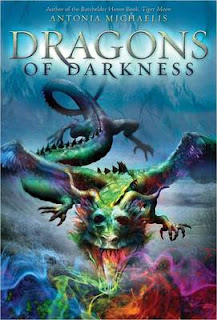 Antonia Michaelis - Dragons of Darkness (1st)
This is the fantastical tale of the invisible prince Jumar who sets out to free his country, Nepal, from rebels, intertwined with the story of Christopher, a shy boy from Germany who is magically transported there to search for his brother, apparently kidnapped by the same rebels. Together, Jumar and Christopher begin a dangerous journey through the wilderness of Nepal that turns into a journey of initiation. Fighting the beautiful but deadly dragons that beset the country, the two boys learn that in order to change the world they need to change themselves first. 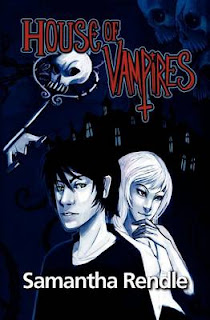 Samantha Rendle - House of Vampires (31st)
An exciting new twist on a popular teen theme: vampires! Fourteen year-old Pete wakes up in a mansion with no idea who he is and no memories. He discovers he's one of a rebel group called the Hunters - vampires with a conscience. Pete and his friends are soon mixed up in a dangerous battle between good and evil. 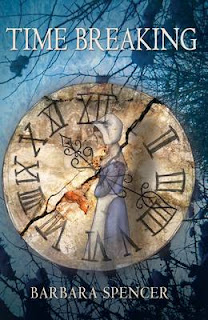 Barbara Spencer - Time Breaking (1st)
Fifteen-year-old Molly is gauche and awkwardly tall, a great disappointment to her parents who only have time for their careers. Constantly at loggerheads because Molly is determined to become a swimmer, the family go to stay in a 17th century manor house now used as a religious retreat. Inadvertently, Molly triggers a time-chute and reappears in 1648, at the end of the Civil War, to find she has taken the place of Molly Hampton, the eldest daughter in a Puritan family. After suffering a beating, an entire morning spent in chapel, a smelly privy, a muddy farmyard, and cold water to wash in, Molly labels the seventeenth century "barbaric" and is hell-bent on escaping back to her own life. But the manor house belongs to Sir Richard Blaisdale, a Royalist family, and is barred to her. Forced to continue with the charade, Molly meets Richard, supposedly her best friend, only to find herself falling in love with him. Gradually, Molly begins to change her mind believing that she can stay and take Molly Hampton's place, little realising that danger and disaster lie in wait for her... 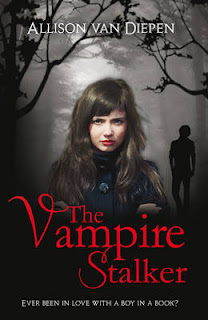 Allison van Diepen - The Vampire Stalker (3rd)
What if the characters in a vampire novel left their world - and came into yours? Amy is in love with someone who doesn't exist: Alexander Banks, the dashing hero in a popular series of vampire novels. Then one night, Amy meets a boy who bears an eerie resemblance to Alexander. In fact, he is Alexander, who has escaped from the pages of the book. 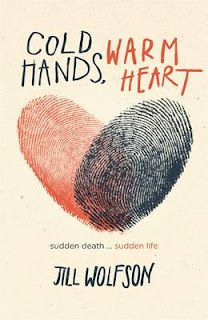 Jill Wolfson - Cold Hands, Warm Heart (3rd)
The lives of two teenage girls become literally connected after 14-year-old Amanda unexpectedly dies during a gymnastics meet and Dani receives Amanda's heart. Fourteen-year-old Amanda is a competitive gymnast, sleek-muscled and in perfect health. Fifteen-year-old Dani was born with her heart on the wrong side of her body; she's been in and out of hospital all her life. The two girls don't know each other - and never will. Yet their lives are about to collide. Amanda suffers a haematoma - a blood clot - during a gymnastics competition, and dies. The donation of her heart means renewed life for Dani and several other donor recipients.
Posted by Karen (Euro Crime) at 09:36