Review: The Mystery of the Whistling Caves by Helen Moss

Here's the fifth post in my week celebrating the young crime solver. 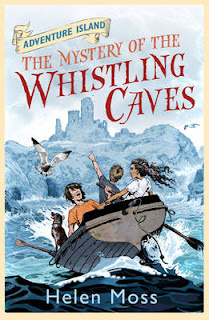 Review: If you were brought up on Enid Blyton, as I was, then this cover alone should win you over. I've been dying to read this one since I heard about it and it was as much fun as I'd hoped.

Scott (13) and younger brother Jack (12) are sent to stay with and elderly relative, "Aunt" Kate, on the Cornish island of Castle Key. Initially upset about this, having had to leave city life and gadgets behind, they decide to explore and visit the castle. They learn that the castle's museum will soon be hosting a display of Saxon treasure. On their way back from the castle they meet Emily, who is a similar age to Jack, and her dog Drift and that's when things begin to look up for the boys.

She invites them on to her boat to see and hear the "whistling caves" at the base of the castle cliffs but she is surprised and a little upset to discover that the whistling has ceased. When they return to dry land they find that some of the treasure has been stolen from the museum. Emily, who has helped the police before, though they didn't appreciate it, invites the boys to help her and Drift solve the case.

The gang carry out the investigation in the traditional way of checking alibis as well as eavesdropping and spying until a revelation (appropriately in a church!) sets them on the right path but one that turns both frightening and dangerous.

This is a puzzling mystery with suspicion falling on first one person then the next and the author does a good job of keeping the reader in doubt as to who the thief is until late in the book. I loved Emily and Drift. Emily is a barefoot tomboy who has her own rowing boat and Drift is a talented dog who appears to have had extra training in being a spy, obeying commands such as "keep watch". The boys soon become enchanted with the island (and Emily to be fair, though not in a romantic way) and Jack is a bit of a cheeky lad with Scott being a rather more cautious character with his extra year.

I-phone carrying old sea dogs, elderly cycling cleaners with gambling addictions - there are plenty of unusual characters on Castle Key which should make for a great summer for the gang. There are six mysteries planned - to coincide with the boys' six weeks of holiday perhaps?- two out in July, two in August and two in September. I can't wait!

I must also add how much I've appreciated the illustrations used at the start of each chapter in this series and Orion's other books such as Lauren St John's Laura Marlin series and Caroline Lawrence's Western Mysteries.

Read an extract from The Mystery of the Whistling Caves on the Orion website.
Posted by Karen (Euro Crime) at 09:36