Here's the fourth post in my week celebrating the young crime solver. 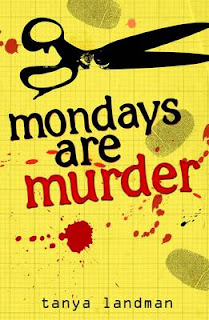 Review: Mondays are Murder is the opening book in a now seven-book series featuring young detective Poppy Fields. Poppy and some other children are spending a week testing out a new outdoor activities centre on a remote island off the Scottish coast.

Poppy is glad that one of the kids is Graham a new boy at her school. He has a geeky, non-sporty reputation and is a mine of facts, especially about how dangerous certain outside activities are! Poppy's speciality is reading body language and soon has her fellow guests and hosts pegged.

Their chauffeur up to Scotland is Bruce, an Australian with severe facial scarring who will be their survival teacher. The other trainers include a husband and wife, who are not a happy couple and a water sports expert and a riding expert.

However on the first day of their "holiday", tragedy strikes and Bruce falls off a cliff into the sea below. And then, one by one the remaining adults begin to have suspicious, deadly accidents; the island becomes unreachable due to a storm and then the radio is damaged.

Together Poppy and Graham decide to get to the bottom of things. It seems like a ghost is killing people but ghosts don't exist, do they?

Mondays are Murder is quite a short book but the body count is high! The surprise in the solution to the mystery relies on you not having read one of Agatha Christie's most famous books, which I won't name so as not to give it away, and it's unlikely that the children reading this, will be aware of it. I first encountered this series last summer when a succession of children came up to the library counter to order it. I would imagine it's quite a scary read as the setting is quite spooky with the weather described keeping the island's occupiers trapped as the instructors are picked off one at a time. Not a lot is revealed about Poppy and Graham's background but perhaps they are more fleshed out in the later books.

The series is aimed at 9+ and you can sample the first few pages of Mondays are Murder here - it opens with a description of a murder, giving an idea of what's in store.
Posted by Karen (Euro Crime) at 08:59