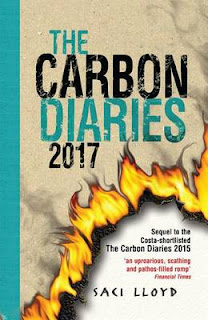 First Lines:
January
Mon, Jan 2nd
So exhausted. My family is in deathlike trance after the village New Year's Eve Organic Goose Fayre.
Review: The Carbon Diaries 2017 begins a year after The Carbon Diaries 2015 and carbon rationing is now a part of most people's lives globally rather than just in the UK.

Laura Brown is now at university in London, her parents are living a rural life in Abingdon and her sister is abroad. Laura's band dirty angels continues to be one of the most important things in her life along with her boyfriend Adi. But as the goverment imposes more taxes, anarchy begins. Laura's friends become activists to different degrees and Laura is torn between being safe and getting involved. The political climate impacts on her lovelife as well as Adi goes hard-core and leaves for Africa to help out those affected by drought, leaving an opening for her new friend Sam. Laura's eyes are opened to what's going on when the band go on tour of France and Laura sees for herself the flow of immigrants into Europe and the way they are treated. The war between the Government and the people finally comes to a head in London and Laura makes her choice(s).

Whereas 2015 dealt with life in the UK under carbon rationing and the impact on domestic life for Laura and her family and friends, 2017 portrays a world gone mad with the rise of the right-wing United Front across Europe, water wars in Europe, America and the Middle East, camps for immigrants and police violence against protesters.

Through all the action Laura manages to keep hold of her diary and documents what's going on and what she's feeling and her story is compelling reading. Laura and her friends spring to life on the page and their adventures will have you tensely reading on. If you've enjoyed 2015 then you'll love 2017 with its broader scope and if you haven't read 2015 then I recommend reading them in order just so you know where Laura's coming from. This is an important series of books which makes an serious topic accessible in a believable teen voice.

Cover: Slightly more eye-catching cover than for 2015 and reflects the serious topics covered.
Posted by Karen (Euro Crime) at 18:41