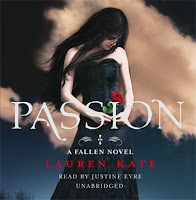 Notes: May contain spoilers for the previous books in the Fallen series.


Review: Passion is the third book in the Fallen series about Lucinda (Luce) Price and fallen angel Daniel. Lucinda's soul has had many previous incarnations but each time when she and Daniel have fallen in love, Luce has died around the age of seventeen. This time around she's still alive; she's broken the curse it seems. Passion explains more about the creating and breaking of the curse.

At the end of Torment, Luce was fleeing for her life and from her situation by diving into a shadow (an announcer). In her current life she is now able to control the announcers and travel through them in time. In Passion, Luce visits several of her previous lives going deeper back in time. She meets a small (flying) gargoyle called Bill in one of her announcers and he joins her and offers guidance (as well as period clothing).

Luce's quest is to see how much and why Daniel loves her and also to break the curse once for and all and she has to witness 'herself' dying again and again.

Meanwhile Daniel and an assortment of Angels, Demons and Nephilim are searching for Luce through time, meeting their own selves at times, until finally Daniel goes back to the beginning...

Passion answers some of the questions about Luce and Daniel and hints at why she is so important to both the Angels and Demons. We find out about the Fall and how Cam ended up on the opposite side to Daniel and though the story doesn't end on quite the personal cliff-hanger of Torment it sets up a mighty global problem to be resolved in Rapture.

I enjoyed Passion more than I thought I would as it seemed like it would be a bit repetitive with Luce going to a time period and Daniel would miss her by a few hours and so on, but enough different information was revealed at each stop to keep the attention. Bill is a humorous character and made things more entertaining. I did prefer the non Luce bits though which revealed more about Daniel and his colleagues. There was one icky part which involved beheadings which I thought was a bit scary!

Justine Eyre continues her excellent performance of this series with readily identifiable voices for the main characters.

I'm eagerly awaiting the library's purchase of the audio book of the final book, Rapture.
Posted by Karen (Euro Crime) at 10:00