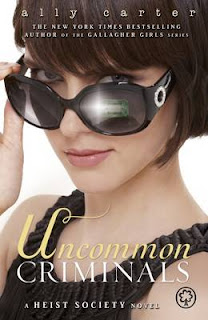 Review: Uncommon Criminals is the sequel to Heist Society, a series about Kat Bishop, a fifteen-year-old thief with principles. Since Heist Society, Kat has been on her own doing a fe jobs which involve re-stealing stolen property and returning it to its rightful owners. Returning to New York, her best friend (and soulmate if she'd just realise it!) Hale is not happy with her but they soon have a new job. They are approached by the rightful owner of the Cleopatra Emerald, which is soon to be displayed in New York, leaving its home in Europe and asked to steal it back for her.

One of the family's rules is not to try to steal the Cleopatra but Kat decides to do it anyway, despite the fact that it's cursed) and is supported by her “crew” of Hale, cousin Gabriella and IT whiz Simon.

The mission to steal the Cleopatra goes both well and badly and the fall-out leaves Kat uncertain about herself and her ability to lead. The adventure then takes them to Europe and in particular Monte Carlo, showcased in the famous Grace Kelly/Cary Grant film, the appropriately named, To Catch a Thief* where they have to plan and execute their most difficult heist so far.

Uncommon Criminals has some exciting and breathtaking set pieces and some progression in the Kat-Hale would-be romance but it is also about Kat and her chosen path. She sees how she could become and that she is fallible. There is plenty of humour and twists and turns in this fast-paced romp and I'm looking forward to Perfect Scoundrels which is out in the UK in February 2013.