There's two weeks' worth here and I went a bit mad at the library before I went on holiday picking up several sequels to books that I've not yet read.

Timeriders: Day of the Predator by Alex Scarrow (I'm looking forward to this as I enjoyed #1 a lot)
Doctor Who: The Glamour Chase by Gary Russell (4 five-star reviews on amazon)
Touching Darkness by Scott Westerfeld
Blue Noon by Scott Westerfeld
Blood Feud by Alyxandra Harvey
This World We Live In by Susan Pfeffer
Swapped by a Kiss by Luisa Plaja
Review

Radiance by Alyson Noel (Macmillan Children's Books, Feb 2011 (UK))
Riley Bloom died, aged twelve, in a car crash with her parents and her beloved dog Buttercup. Her sister Ever survived – but that’s another story. Riley must let go of Ever and all the things that tied her to life – and discover what she’s meant to be in the afterlife. Riley is a soul catcher. That means helping the unhappy lost souls who stick around in the human realm to move on – and find their own place, over the bridge, in the great hereafter. With her spirit guide, Bodhi, and Buttercup by her side, Riley embarks on an adventure that will take her around the world – sending ghosts back where they belong, until she can finally make it there herself.

The Weirdstone of Brisingamen by Alan Garner (HarperCollinsChildren'sBooks, out now)
A tale of Alderley

When Colin and Susan are pursued by eerie creatures across Alderley Edge, they are saved by the Wizard. He takes them into the caves of Fundindelve, where he watches over the enchanted sleep of one hundred and forty knights.

But the heart of the magic that binds them – Firefrost, also known as the Weirdstone of Brisingamen – has been lost. The Wizard has been searching for the stone for more than 100 years, but the forces of evil are closing in, determined to possess and destroy its special power.

Colin and Susan realise at last that they are the key to the Weirdstone’s return. But how can two children defeat the Morrigan and her deadly brood?

Jiggy's Magic Balls by Michael Lawrence (Orchard, out now)
In the Jiggy's Genes series we will meet a whole host of Jiggy's ancestors and discover that, through centuries past, there have always been Jiggys!

Across the Universe by Beth Revis (Puffin, March 11) (what a cover!)
Amy has left the life she loves for a world 300 years away Trapped in space and frozen in time, Amy is bound for a new planet. But fifty years before she’s due to arrive, she is violently woken, the victim of an attempted murder. Now Amy's lost on board and nothing makes sense - she's never felt so alone. Yet someone is waiting for her. He wants to protect her; and more if she’ll let him. But who can she trust amidst the secrets and lies? A killer is out there – and Amy has nowhere to hide . . .

Monster High by Lisi Harrison (ATOM, out now)
The monster community has kept a low profile at the local high school, but when two new girls enrol, the town will never be the same. Created just fifteen days ago, Frankie Stein is psyched to trade her father's formaldehyde-smelling basement lab for parties and prom. But with a student body totally freaked out by rumors of monsters stalking the halls, Frankie learns that high school can be rough for a chic freak like her. She thinks she finds a friend in fellow new student Melody Carver-but can a 'normie' be trusted with her big secret?

Doctor Who: Demon Quest (1): Relics of Time written by Paul Magrs and narrated by TOM BAKER(!!) (BBC Audiobooks Ltd, out now)
Tom Baker reprises the role of the Fourth Doctor in the first of five thrilling brand new adventures, with Susan Jameson as Mrs. Wibbsey. The Doctor's return to Nest Cottage lands him in trouble when a key component from the TARDIS disappears. Mrs. Wibbsey is inadvertently responsible, but all she can offer in recompense is a bag containing four curious objects. It seems that each one is a clue, and the beginning of a chase through Time. In ancient Sussex they are apprehended by primitive tribesfolk, and mistaken for wizards. Can the revered goddess Wibbsentia get them out of hot water? Who is the fearful wizard in the neighbouring village, and why is the countryside littered with bodies? The Doctor and Mrs Wibbsey are about to discover that all is not right with history...

Burning Secrets by Clare Chambers (HarperCollinsChildren'sBooks, March 11)
An intense and thrilling teen mystery set on a tranquil island where all seems perfect…

Daniel has dark secrets and a troubled past. So when his family move to the island of Wragge, a gentle backwater where local life remains undisturbed he feels he’s escaped.
But outsiders aren’t always welcome and the more Daniel tries to conceal, the more he reveals about sinister goings on. Does this picture perfect community have something even greater to hide?

Grace by Morris Gleitzman (Puffin, Feb 11)
In the beginning there was me and Mum and Dad and the twins. And talk about happy families, we were bountiful. But it came to pass that I started doing sins. And lo, that's when all our problems began... 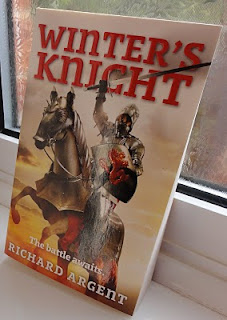 Winter's Knight by Richard Argent (ATOM, out now)
As a boy, Andrew was touched by the otherworld when the ghost of a dead murderer sought out his village, showing him his fate. And though his father is just a blacksmith, nothing will keep Andrew from riding to the Crusades to seek the honours he has been promised. He lives battles of the imagination, seeing harsh midday sun glint off sword and armour, where he rides his horse into war in a riot of colour and noise. But dead men keep secrets, and much of the future has been kept from him. Andrew may find the glory of the Crusades and skirmish with Saladin's most powerful warriors. Or he may become entangled in Templar politics and wander in the desert haunted by jinn and demons. What is certain is that Andrew will face tests of blade and spirit. And his dreams will be measured in blood before he sees home again.
(One of my Euro Crime website reviewers has volunteered to review this one as it's not really my thing.)
Posted by Karen (Euro Crime) at 20:19