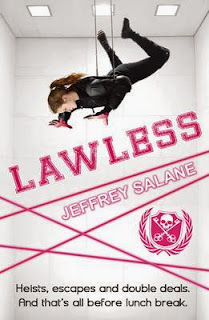 Twelve-year-old M Freeman has been home-schooled up until now but is then sent on an interview to the secretive Lawless school. She passes the interview and is immediately thrown into a new life. She barely has time to say goodbye to her mum (her father having died in a plane accident) and home before being whisked away in a limousine with her “guardian”, a teenager called Zara.

The journey to the Lawless School is very eventful and introduces M to the concept of the Fulbrights – a group opposed to Lawless and who attack the pupils at every opportunity.

After a headlining-grabbing few days, M settles down to learn along with her small group of friends. But Lawless is not just a private school, it's a private school for offspring of criminals who want to keep the family business going. This is all news to M but she soon feels at home and wants to learn about her mysterious father who is well known at Lawless.

Thus begins a twisty adventure tale with M not knowing whom she can trust, including Zara and one of the teachers - Miss Watts - who had been close to M's father. The school setting gets left behind as M runs her first heist - in Europe – and it's action all the way, the ending leaving you wanting more.

Lawless is billed as book one so I hope there's a sequel as there are many loose ends*. M is a resourceful, clever main character – perhaps too clever for her years – and the villains a bit megalomaniacal, but this was a fun read and with no bad language or even romance this is a suitable read for younger teens and below.