Review: The Selection by Kiera Cass 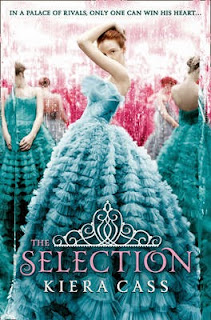 The Selection is the first book in the series and is set in a dystopian America now called Illea. Society is now structured into castes with One being the Royal Family and Eight being the lowest worker. America Singer is a Five and is in love with Aspen, a Six.

It is tradition for the princes of the Royal Family to choose a bride via the Selection process – where one girl from each of the 35 provinces is sent to the palace and the numbers decrease until the Prince finds his mate.

At the beginning of the book, the letters have gone out to all young women eligible for the Selection which includes America. She does not want to enter as she is in love with Aspen and wants to marry him despite it being a downgrade in status. He, however, persuades her to enter anyway and when they break-up due to his pride she is grateful for the opportunity to get away when she is chosen for the Selection.

Prince Maxon is the young man looking for a bride and is not as stuffy and as arrogant as America fears and indeed they strike up a friendship. America makes it clear she has no feelings for him however she cannot control his...

As the Selection process progresses America gets to learn more about the state of the country and experiences two Rebel advances on the palace. And when an old acquaintance joins the palace staff, she becomes confused about why she is at the palace and what she should do about her growing feelings for Maxon.

The Selection wasn't what I was expecting – I was worried about it being all catty and nasty with all those girls competing, however there is only one spiteful girl with the rest bonding together – as even the girls who don't get chosen get a permanent increase in caste and other benefits. In fact not a great deal happens in The Selection, it very much sets the scene for the next books, and I hope these contain plot threads about the state of the country and how Illea can be improved, in addition to America's love life. Nonetheless it was an enjoyable read and there is a lot of potential for a more dramatic continuation of the series.
Posted by Karen (Euro Crime) at 09:21