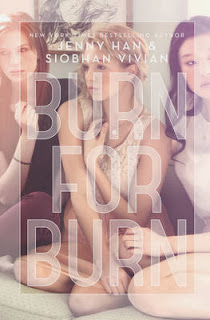 
Burn for Burn is the first book in a new trilogy from Jenny Han co-writing with Siobhan Vivian set on Jar Island. The chapters alternate between three girls: Lillia, rich who is BFF to Rennie; Kat, not so rich and ostracised by lies told by Rennie and Mary who returns to the island after a few years absence. All three girls have been hurt, Lillia by a boy, Kat by Rennie and Mary by the star quarterback. When they are accidentally thrown together an idea sparks and Kat decides to act on it. Lilia and Mary don't need much persuading and they meet in secret to plan the ultimate revenge on their three enemies...

As with the Summer I Turned Pretty
trilogy (by Jenny Han) I absolutely flew through Burn for Burn. I could appreciate that the girls wanted revenge but they do get more than they bargained for resulting in an ending which leaves the reader desperate to get Fire for Fire. I hoped that one assumption they'd made would turn out to be false and, really, how far should the girls go to right a wrong? Initially I found the chapters from Mary's point of view the least interesting of the three (and her experiences the most painful to read) but it looks like she's more than she seems...

The sequel Fire for Fire has recently been released in the UK.

NB. As the characters are around eighteen, there is some adult content.

[Burn for Burn can be read online at Pulseit until 6 October 2013.]