Review: A Double Helping of the Origami Yoda series by Tom Angleberger 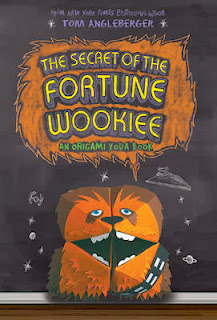 
Review: After finishing a very downbeat Scandinavian crime novel I decided I needed something light and funny to read and fortunately I had The Secret of the Fortune Wookie and The Surprise Attack of Jabba the Puppett, books three and four in the Origami Yoda series in my library book tbr.

As with the previous two, The Strange Case of Origami Yoda and Darth Paper Strikes Back they take the form of case files ie lots of short chapters from different pupils at McQuarrie Middle School collated by Tommy and annotated/doodled on by Harvey and Kellen.


With the absence of Dwight and his Origami Yoda it's Sara's turn to dispense Jedi wisdom via her Fortune Wookie and the case file is, is the Wookie as good as Yoda? Also what is happening with Dwight? He's at a new school and has had a personality transplant to a “normal” person but is he happy? And will he come back to McQuarrie after he's served his suspension? 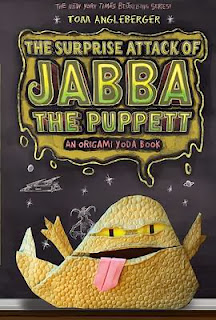 In Jabba, rather than one finger puppet, many required are they, as the gang, form the origami rebel alliance to bring down the evil empire of FunTime, a new and tedious learning programme brought in to improve their test scores which has replaced all their non-academic modules such as drama and robot making. Each of the contributors to the case file has their own origami figure puppet – Tommy has Foldy-Wan Kenobi – and all must recruit more of their fellow pupils to the cause.

I really enjoyed these two books, they make me smile. I now feel I'm getting to know the individuals – Sara, Tommy, Kellen, Harvey, Dwight and more who contribute to the case files. I love the Star Wars theme and there are lots of clever doodles in the margin. The gang have to face a serious problem in Jabba and it's not resolved yet; I'll have to wait until next year's Princess Labelmaker to the Rescue to find out if they succeed.

Also available is Art2-D2's Guide to Folding and Doodling which shows you how to make many of the origami finger puppets and doodles and much more. It also comes with some coloured sheets of paper in it.
Posted by Karen (Euro Crime) at 16:51

Labels: Origami Yoda, review, The Secret of the Fortune Wookiee, The Surprise Attack of Jabba the Puppett, Tom Angleberger