Review: The Secret Diary of Lizzie Bennet by Bernie Su and Kate Rorick 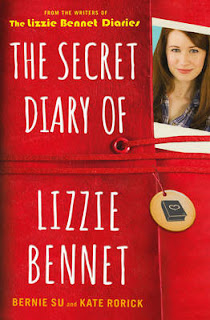 The Secret Diary of Lizzie Bennet, based on the YouTube series The Lizzie Bennet Diaries, based on Jane Austen's Pride and Prejudice is every bit as delightful as the original.

The Bennet family is somewhat smaller that Austen's but there's lots going on with Jane, Lizzie and Lydia.

Due to financial constraints, Mrs Bennet is keen to have her older daughters married off and out of the house – not necessarily in that order – so when the wealthy Bing Lee rents a posh house in Netherfield, Mrs Bennet schemes to get her daughters in front of him. Meanwhile Lizzie is in grad school and as part of her studies she has decided to document her personal life on video, with the help of her best friend Charlotte. As the diaries become popular, Lizzie's younger sister Lydia begins to do her own.

The Secret Diary of Lizzie Bennet follows the same path as Pride and Prejudice – introducing Darcy, Mr Collins, George Wickham, Catherine de Bourgh and documents the happy times and the pain these characters cause either by mistake or deliberately, all the while set in the modern-day world with Lizzie and Darcy both involved in creating Internet content. The sisters go from living at home and dependent on their family to being able to leave the nest and have successful careers.

I thoroughly enjoyed The Secret Diary of Lizzie Bennet. Despite being based on a classic story it is very modern (including references to pregnancy-scares and sex-tapes) with lots of twists on the original. Being a diary format, it means you'll think “I'll just read one more chapter” and before you know it you've reached the end! I haven't seen the YouTube series (yet) but that didn't affect my enthusiasm for the book.
Posted by Karen (Euro Crime) at 10:00