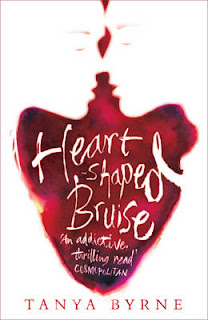 Notes: The following review is written by Laura Root and is reprinted from my Euro Crime website. You can read her crime reviews here.

Review: Heart-Shaped Bruise is Tanya Byrne's first novel, and a highly impressive debut. The protagonist, Emily Koll, is a remand inmate in the psychiatric wing attached to the fictional Archway Young Offender's Institute. This book is purported to be the contents of a notebook found in Emily's former room/cell after the closure of the YOI. We never learn the actual charges against Emily Koll, that have led the tabloids to dub her "Evil Emily Koll" and make her the source of curiosity and notoriety even amongst the fellow inmates. The reader is aware from the start that Emily has committed some terrible deeds as revenge against Juliet Shaw, the teenage girl who stabbed Emily's father, a violent gangster, after he shot and killed her father, a policeman. Emily's father survived the stabbing but was sent to prison.

Emily was blissfully unaware of her father's criminality until the stabbing, and wholly blames Juliet for the unravelling of the certainties of her pampered private school Surrey life. After taking to cigarettes and alcohol to cope in exile in Spain, Emily is eventually so eaten up by anger that she decides to take her revenge against Juliet. With the help of her gangster uncle, Emily manages to find out Juliet's new identity (Juliet has been relocated under the Witness Protection Scheme), and assume a false identity herself. Rose starts off by stalking Juliet then enrols at the same London sixth form college, to attempt to befriend Juliet. Matters are complicated by a love triangle - Emily is rather fond of Juliet's new boyfriend, the slightly older, glamorous but troubled Sid. Emily doesn't want to take her revenge straight away - instead she broods and plans and insinuates herself into Juliet and Sid's lives, as she starts to enjoy a more normal teenage life, of cider, parties and concerts, away from the bubble of boarding school privilege.

But this novel has a wider scope, moving beyond this intriguing revenge set up, by way of using a dual time line -we see the past via both the crumbs of information Emily is coaxed into revealing in her sessions with the prison psychiatrist, and the fuller version Emily confides to her diary, and we see the present that Emily is experiencing as a remand prisoner. In fact quite a proportion of the novel looks at Emily's experiences on remand, and the prison system's attempts at psychological help for someone who has committed a dreadful crime. Emily is (at least by her own account) initially sarcastic and highly resistant to the questions asked by the resident psychiatrist, Dr Gilyard, using her brittle wit as a defence mechanism, keen to prevent Dr Gilyard from going over her "line". Little by little, her reticence is chipped away, and she reveals more about her past, both with her father and with Juliet.

The depiction of the criminal justice system rings true, as the author conveys the relationships between the psychiatric unit inmates in a convincing and touching manner. The cycle of the remand prisoner in the justice system is well depicted - the unit's population, and Emily's quasi-friendships are transient, as the residents of the psychiatric unit come and go, as they are deemed well enough to be returned to the main prison population or are tried and dealt with in the criminal courts.

This is an excellent and assured debut novel. The multiple timeline aspect is very deftly handled; the theme of procrastination/delayed revenge (with its Shakespearean echoes) works, adding tension to the story so the action does not feel unduly slowed. Emily Koll is a compelling, if not always attractive character. Although she is not exactly an easy person to sympathise with, given her utter lack of empathy and the viciousness she shows towards Juliet, Tanya Byrne does a good job of letting us see beyond the headlines declaiming about "evil" in the case of a violent offender like Emily. We can see just how damaged Emily is herself, and how far her earlier life experiences have affected her (much is hinted at but never made explicit regarding the disappearance of Emily's mother and Emily's probable eating disorder). Other characters in Emily's life are well drawn, in particular that of Juliet, who in contrast to Emily, has not been soured by her tragic life experiences but is attempting to rebuild her life as best she can.

I look forward to reading future books by this author.