I went to my second ATOM bloggers party on Wednesday. I remember last year it was bitterly cold but this time it was warm enough to stroll around and take some photos.

This is taken at around 4.30pm from Blackfriars Bridge next to the home of ATOM (Little, Brown). 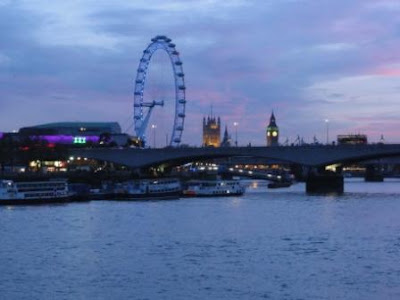 This is the fab building they work in at 100 Victoria Embankment!!! 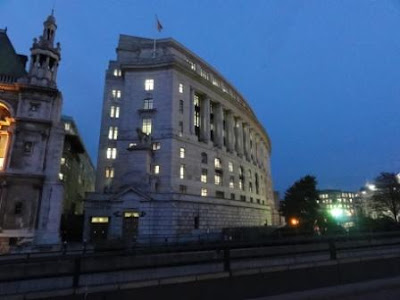 The evening began with piles of books laying around for us to help ourselves to as well as sandwiches, cake and drinks. The theme of the night was a "new term" so the lovely ladies had dressed up in school ties and we were given prefect labels with our names on.

Once all were gathered, we were given a presentation on the 2012 list and informed that two authors: C J Daugherty and Sarra Manning were present. 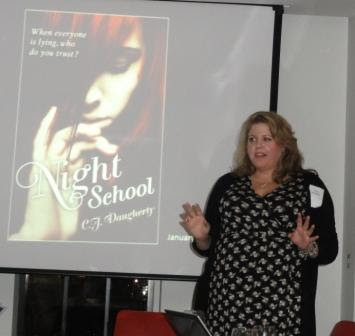 CJ Daugherty explained bit about how the plot of Night School developed: whilst going round some country villages with her husband she spotted a scary school building and asked herself who'd send their children there!

Here's the official blurb on amazon: When everyone is lying, who can you trust? Allie Sheridan's world is falling apart. She hates her school. Her brother has run away from home. And she's just been arrested. Again. This time her parents have finally had enough. They cut her off from her friends and send her away to a boarding school for problem teenagers. But Cimmeria Academy is no ordinary school. It allows no computers or phones. Its students are an odd mixture of the gifted, the tough and the privileged. And then there's the secretive Night School, whose activities other students are forbidden even to watch. When Allie is attacked one night the school begins to seem like a very dangerous place, Allie must learn who she can trust. And what's really going on at Cimmeria Academy.

Next up was Michael Northrop's Trapped which is published on 15 December 2011 and was described as "Lord of the Flies"-esque: 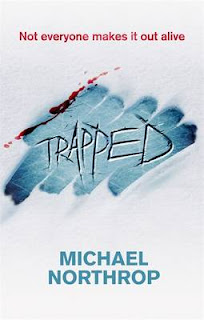 Amazon blurb: The day the blizzard started, no one knew that it was going to keep snowing for a week. That for those in its path, it would become not just a matter of keeping warm, but of staying alive . . . Scotty and his friends are among the last seven kids at their high school waiting to get picked up that day, and they soon realize that no one is coming for them. Still, it doesn't seem so bad to spend the night at school, especially when Krista and Julie are sleeping just down the hall. But then the power goes out, then the heat. The pipes freeze, and the roof shudders. As the days add up, the snow piles higher, and the empty halls grow colder and darker, the mounting pressure forces a devastating decision . . .


Robin Wasserman's The Book of Blood and Shadow is also published 5 January 2012.
"The Da Vinci Code meets Die for me - in Prague! 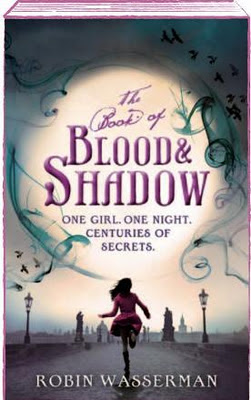 Amazon blurb: It was like a nightmare, but there was no waking up. When the night began, Nora had two best friends and a boyfriend she adored. When it ended, she had nothing but blood on her hands. Chris was dead. Adriane couldn't speak. And Max, Nora's sweet, smart, soft-spoken Prince Charming, was gone. He was also—according to the police, according to her parents, according to everyone—a murderer. Desperate to prove his innocence, Nora's determined to follow the trail of blood, no matter where it leads. But Chris's murder is just one piece in a puzzle that spans continents and centuries. Solving it may be the only way she can save her own life.

February brings Under the Never Sky by Veronica Rossi which is post-apocalyptic but ATOM stresses the key is the love story. 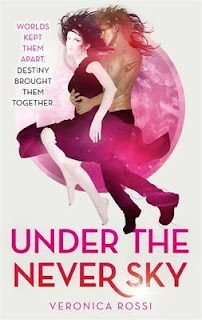 Amazon blurb: Aria has lived her whole life in the protected dome of Reverie. Her entire world confined to its protected space, she's never thought to dream of what lay beyond its doors. Perry and his tribe have always struggled to survive on the outside. Though their lives are simple they are increasingly under threat from an unknown - and unhuman - enemy. But when Perry saves Aria after one of these attacks she realizes that she might just be able to survive in the outside after all. And that this one sheltered girl might be the only one that can save ? or destroy ? his people.

In March, Bunheads by Sophie Flack, described as "Black Swan for the teen set" is published. The bottom line is "her first solo or her first love?": 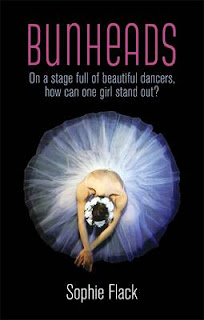 Amazon blurb: On-stage beauty. Backstage drama. As a dancer with the ultra-prestigious Manhattan Ballet Company, nineteen-year-old Hannah Ward juggles intense rehearsals, dazzling performances and complicated backstage relationships. Up until now, Hannah has happily devoted her entire life to ballet. But when she meets a handsome musician named Jacob, Hannah's universe begins to change and she must decide if she wants to compete against the other 'bunheads' in the company for a star soloist spot or strike out on her own in the real world. Does she dare give up the gilded confines of the ballet for the freedoms of everyday life?


And in April, 172 Hours on the Moon by Johan Harstad, tr. Tara F Chace. Apparently this is very scary, reminiscent of 70s SF and more recently the film Moon. 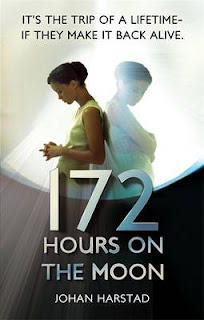 Amazon blurb; Three teenagers are going on the trip of a lifetime. Only one is coming back. It's been more than forty years since NASA sent the first men to the moon, and to grab some much-needed funding and attention, they decide to launch an historic international lottery in which three lucky teenagers can win a week-long trip to moon base DARLAH 2 - a place that no one but top government officials even knew existed until now. The three winners, Antoine, Midori, and Mia, come from all over the world. But just before the scheduled launch, the teenagers each experience strange, inexplicable events. Little do they know that there was a reason NASA never sent anyone back there until now - a sinister reason. But the countdown has already begun...

ATOM are introducing a new list aimed at 8-12 year olds which is of particular interest to me as I run a reading group for that age at the library.

In March, the first in a trilogy, The Witch of Turlingham Academy by Ellie Boswell is released. ATOM describe the series as "The Worst Witch meets the Chocolate Box Girls". Amazon blurb: It's not easy being the only day girl at Turlingham boarding school: Sophie misses out on all the midnight feasts and late night gossip. Things take a turn for the worse when a new girl - Katy - shows up and all Sophie hears is Katy, Katy, Katy from her friends. It's like she's put a spell on everyone. Katy's no witch, but there is a witch at Turlingham. Katy comes from a long line of witch hunters whose fate is to stop evil magic once and for all. Sophie is going to help her - anything to get Katy out of her life and get things back to normal. But what she finds out means nothing will ever be normal again!

In April: "Goosebumps for Girls" the Creeper series by P J Night begins with Truth or Dare. 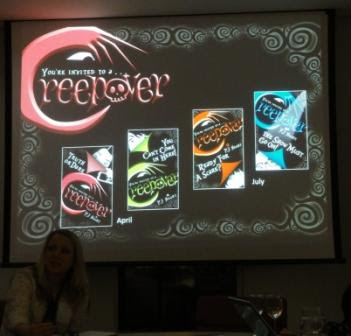 Amazon blurb: During a round of Truth or Dare, Abby Miller confesses her crush on Jake Chilson. The only people who know her secret are her friends at the sleepover - and whoever sent her a text message in the middle of the night warning her to stay away from Jake...or else! But Abby isn't going to stay away from Jake, especially not after he asks her to the school dance. As the night of the dance comes closer, some very creepy things start happening to Abby. Someone definitely wants to keep her away from Jake. Is it a jealous classmate or, as Abby begins to suspect, could it be a ghost?


May and August's offerings looks fun! The Goddess Girls series by Joan Holub and Suzanne Williams begins with Athena the Brain, followed by Persephone the Phony, Aphrodite the Beauty and Artemis the Brave: "Because even goddesses need training". 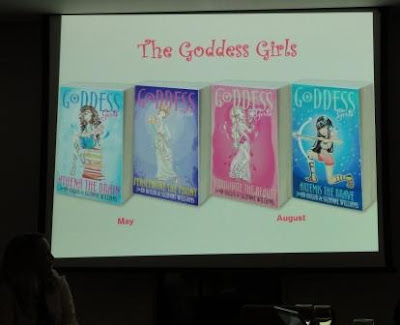 Amazon blurb: Athena has always been above average. She's never quite fit in at Triton Junior High, but who would've guessed that Athena is actually a goddess? Principal Zeus's daughter, to be exact. When she's summoned to Mount Olympus Academy, Athena thinks she might actually fit in for the first time in her life. But in some ways, school on Mount Olympus is not that different from down on Earth, and Athena is going to have to deal with the baddest mean girl in history -- Medusa! Authors Joan Holub and Suzanne Williams put a modern spin on classic myths with the Goddess Girls series. Follow the ins and outs of divine social life at Mount Olympus Academy, where the most privileged godboys and goddessgirls in the Greek pantheon hone their mythical skills.

The final announcement was the Sarra Manning is joing the ATOM list with...Adorkable which is published in May.

Amazon blurb: Jeane Smith is seventeen and has turned her self-styled dorkiness into an art form, a lifestyle choice and a profitable website and consultancy business. She writes a style column for a Japanese teen magazine and came number seven in The Guardian's 30 People Under 30 Who Are Changing The World. And yet, in spite of the accolades, hundreds of Internet friendships and a cool boyfriend, she feels inexplicably lonely, a situation made infinitely worse when Michael Lee, the most mass-market, popular and predictably all-rounded boy at school tells Jeane of his suspicion that Jeane's boyfriend is secretly seeing his girlfriend. Michael and Jeane have NOTHING in common - she is cool and individual; he is the golden boy in an Abercrombie & Fitch T-shirt. So why can't she stop talking to him?

I want to read them all! Many thanks to ATOM for the evening, the company, the nibbles and the books!

Read more about the event at the ATOM blog, at The Pewter Wolf (where there's also a giveaway!) at Pretty Books and Cheezyfeet Books.
Posted by Karen (Euro Crime) at 10:44