Here are some of the teenage/YA titles that are being published in the UK in February 2013. I will put a link to this post and subsequent "monthly" lists in my sidebar.January's list is here.

I have tried to identify all the British authors which I hope will be useful to those doing Sarah's British Books Challenge at Feeling Fictional. (please let me know of any errors or omissions).

Posted by Karen (Euro Crime) at 09:05 No comments: Links to this post

In case you haven't seen it the cover for Lauren Kate's Teardrop is... 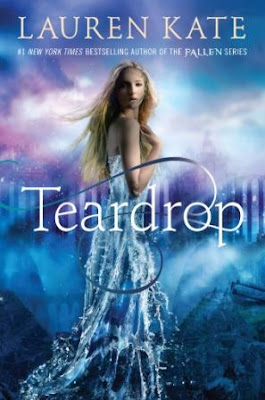 Posted by Karen (Euro Crime) at 20:11 No comments: Links to this post

I received the following press release from Random House regarding a new series from Fallen's Lauren Kate:

Random House Children’s Publishers have acquired a new series by Lauren Kate the author of the internationally bestselling series, Fallen. Three books were acquired in the UK by Annie Eaton and Becky Stradwick, the first; TEARDROP will be released in the UK in October 2013.

The story stars a seventeen-year old named Eureka Boudreaux whose tears possess the power to raise the lost continent of Atlantis. The TEARDROP jacket will be exclusively revealed on the Fallen Facebook page on Monday 11th February.

Which reminds me that I mus get on and read/listen to Rapture...
Posted by Karen (Euro Crime) at 13:02 No comments: Links to this post

A couple of links in today's Booktrade about buy outs and new imprints and a publishing deal:

The first book under the new YA label will be New England Rocks, to be published worldwide in August 2013 in ebook and paperback formats. This title is the first in the New England series written by Christina Courtenay, marking a departure from her award winning historical fiction.

The heroine of the New England series is Rain Mackenzie, a young woman who trouble just seems to stick to. Expelled from her British boarding school, she can't believe her bad luck. Not only is she forced to move to New England, USA, she's also sent to the local high school, as a punishment. She's determined to hate everything, and her rebellious nature soon finds new ways to court controversy. And that's not all she's courting...

Posted by Karen (Euro Crime) at 12:23 No comments: Links to this post