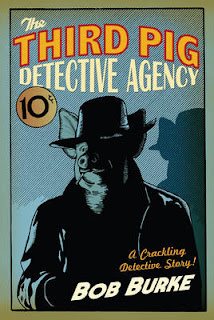 Review: The Third Pig Detective Agency is the first in what looks to be a series to feature the pig that escaped from the Big Bad Wolf - the third pig - the name's Pigg, Harry Pigg. Flush with his success at defeating the wolf, Harry has set up his own private investigation firm in Grimmtown, with a cow for a secretary (he's not being rude she's a real cow, called Gloria).

Business has been slow so he can't afford to turn down a client, especially when the client turns out to be his new landlord and Harry is in debt up to his front trotters. Aladdin (call me Mr Aladdin) is the client and he wants Harry to solve the disappearance of a certain lamp and return said lamp in double quick time.

Though the first part is easy for a PI of Harry's calibre, the second part gets him into all sorts of trouble and he doesn't come out of it smelling of roses (quite the reverse, literally). It's going to take some magic to keep Harry in one piece and to resolve the ownership of that lamp...

The Third Pig Detective Agency should raise more than a few smiles as the reader gets to meet some familiar faces from fairy tales and nursery rhymes whilst Harry wisecracks his way through solving the mystery. The mystery is complex enough to keep the reader puzzled but not so difficult that it cannot be contained within 150 pages. Harry is a unusual take on the traditional American gumshoe character and I look forward to reading his next adventure, which, according to the last page, is The Ho Ho Ho Mystery.

Cover: The cover and in fact the whole book is beautifully presented with a dust jacket and illustrations eg tyre tracks on some of the pages.