I'm very pleased to welcome L A Weatherly to Teenage Fiction For All Ages today as part of her Angel Fire Blog Tour. Angel Fire is the sequel to the very well-received Angel. 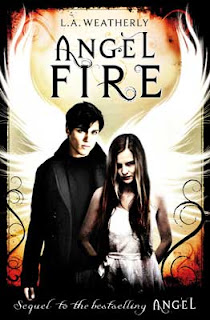 Synopsis
Only Willow has the power to defeat the malevolent Church of Angels - and they will stop at nothing to destroy her. However, Willow is not alone. She is with Alex, a trained Angel Killer - and her one true love. Together, they must train a new generation of Angel Killers. But as a half-angel, Willow can't help feeling like an outcast, even with Alex by her side. So when a handsome stranger with a tortured past arrives at the AK camp, Willow finds herself inextricably drawn to him.


You can find out more about the series at the Angel website and on twitter: @Angel_Book and now over to L A:

From an author’s point of view, the answer’s simple: once a fictional couple confesses their love for each other and feels secure in that love, such as Willow and Alex at the end of Angel, you then have to find other challenges for them to overcome. Much as I adore both Willow and Alex, an entire novel of them happily proclaiming their love to each other would be pretty boring to write – and even worse to read! So bringing in the character of Seb as another romantic interest was a great way to add tension and drive. (Also, Seb can be very persuasive. Once he’d made his presence known to me, there was no way he was not going to be in the story.)

I think that’s why readers enjoy love triangles so much, too. Though logically they might hate the idea of anything threatening Alex and Willow’s romance, deep down that’s exactly what they do want: to experience the delicious agony of things not working out, and then the catharsis of a satisfying payoff. (I won’t give away any spoilers, but I think readers will be happy with how things work out in Angel Fire!) And of course, there’s the added appeal of being able to imagine yourself as Willow, with two gorgeous boys in love with you.

Though I was aware of all that while writing Angel Fire, I also wanted to keep things very real, and not avoid difficult or painful situations. While I loved the Twilight series, for instance, there never really seemed much doubt to me that Bella would end up with Edward. In Angel Fire, I wanted to push things further; to genuinely challenge Willow and Alex’s love with a character Willow is both attracted to and has deep feelings for – and who, in many ways, is absolutely perfect for her. Both Willow and Alex – and Seb, come to that – go through the emotional wringer in Angel Fire; their love is tested in ways they never even imagined.

I loved writing Angel Fire, though as always I became very emotionally involved in the story myself, so that it was a relief to write that final, cathartic scene! I won’t say too much yet about how things might go on to develop in book three, Angel Fever …except to say that I rather imagine we haven’t seen the last of the love triangle yet.

Meanwhile, I hope you enjoy reading Angel Fire as much as I did writing it – and I’ll look forward to hearing whether you’re Team Alex or Team Seb! ;).

Many thanks to L A and Usborne

The previous stop on the tour was at Daisy Chain Book Reviews and don't miss the next stop on Tuesday at Bookbabblers.
Posted by Karen (Euro Crime) at 09:00